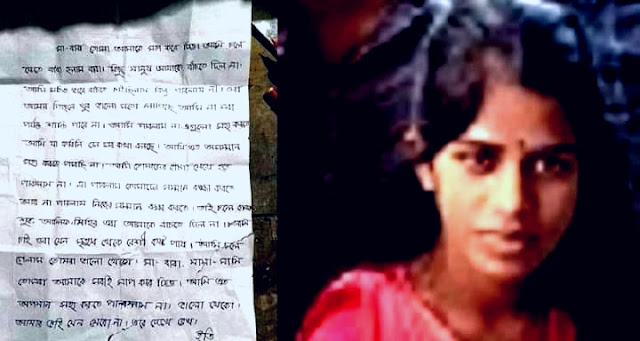 A Hindu college student named Tanushree Majhi (18) committed suicide due to fear of Love Jihadists in Koyra, Khulna. Before committing suicide, she wrote the names of three love jihadis in the suicide note. Deceased Tanushree Majhi was the daughter of Deepak Majhi of Hadda village in Maheshwaripur union of Koyra Upazila in Bangladesh. On September 15, Tanushree committed suicide by hanging herself at her home in the afternoon. She was a first-year student of Garikhali Abu Musa Memorial Degree College.

A part of the suicide note says, “I just wanted to live properly, but I couldn’t. They are following me everywhere. There will be no peace until I die. Alif, Mihir, Shubho they didn’t let me live. Father, mother, uncle and aunt please forgive me.”

Tanushree’s father Deepak Majhi said that after having lunch, he went to the riverside. Around 4:30 in the afternoon, he found out that his daughter committed suicide. He quickly came home and recovered the body of her daughter. Then they saw the suicide note under her mobile phone. The words were written on that paper mentioning the names of three people.

IC Md. Moniruzzaman said ‘the body has been handed over after the autopsy. Action will be taken against anyone who had instigated this suicide.” Koira Police Station Officer-in-Charge (OC) ABMS Doha said that, “a college student named Tanushree committed suicide on Thursday afternoon. She wrote a suicide note. Three names are mentioned there. The handwriting on the note would be checked to see whether it is the writing of the deceased student. Further action will be taken after investigation.”

Previously a Hindu girl was drugged by her classmate’s mother in the Sylhet district of Bangladesh. The victim Hindu girl is a Class IX student of Premadamoyee Girls’ High School, a traditional and the only all-girls educational institution in Madhabpur of Sylhet division.