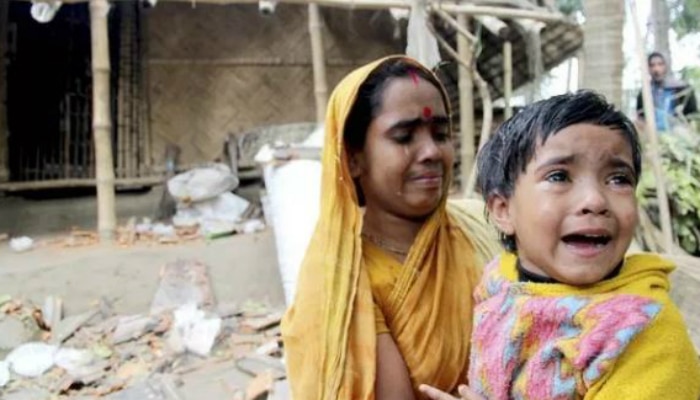 Govinda Chandra Pramanik, secretary-general of the Bangladesh Jatiya Hindu Mahajot, claimed that 79 members of the Hindu minority had been killed in Bangladesh till June 30 this year. From January 1 to June 30, 26 crores 2 lakh 30 thousand rupees were extorted and 157 Hindu families and temples were looted, 620 people were threatened with death, 145 murder attempts, 183 people were injured and 32 people were missing.

He made the remarks in a written statement on behalf of the Hindu Mahajot at a press conference at the Dhaka Reporters Unity Nasrul Hamid auditorium on Saturday (July 2nd) morning. These informations were collected through the branch committees of the organization all over the country. At the press conference, the Bangladesh Jatiya Hindu Mahajot demanded 60 reserved seats for the minority Hindu community in the Jatiya Sangsad (National Assembly) and the “re-establishment” of a separate electoral system with a view to preventing violence and torture, ensuring their representation to make democracy meaningful. The organization also demanded the establishment of a separate ministry for minority affairs.

According to the report, there have been 501 organized attacks, 56 temples attacked and vandalised, 219 idol vandalism, 50 idol thefts, 77 kidnappings and 15 kidnapping attempts this year. In addition, 13 members of the Hindu community were raped, 10 were gang-raped, three were killed after the rape, 19 rape attempts, 95 were converted, 21 were tried for conversion and 63 incidents of hurting religious sentiments in the country.

In addition, 97 members of the Hindu community have been arrested, dismissed, dismissed and jailed for fake cases, 802 families have been socially blocked, 57 religious institutions have been desecrated, 60 religious ceremonies have been obstructed, and 100 people have been forcefully fed religiously forbidden beef. A total of 638 separate incidents have caused a loss of 152 crores 35 lakh 55 thousand takas. Govinda Chandra Pramanik said, “The continuity of these incidents proves that the living conditions of Hindus in this country are becoming more difficult day by day.”

Seeing the report, it is clear that the minority community of Bangladesh is not at ease. Govinda Chandra Pramanik had further said in the press conference that the persecuted Hindus are in a miserable condition. Among these, the innovative strategy of expelling Hindu teachers from educational institutions has become a new strategy of the Islamists. In the presence of the police and the administration and with active cooperation, Hindu teachers are being beaten and harassed with shoe garlands around necks. In Dhaka, Narayanganj, Gopalganj, Narail, Savar and other places, one incident after another is happening non-stop.