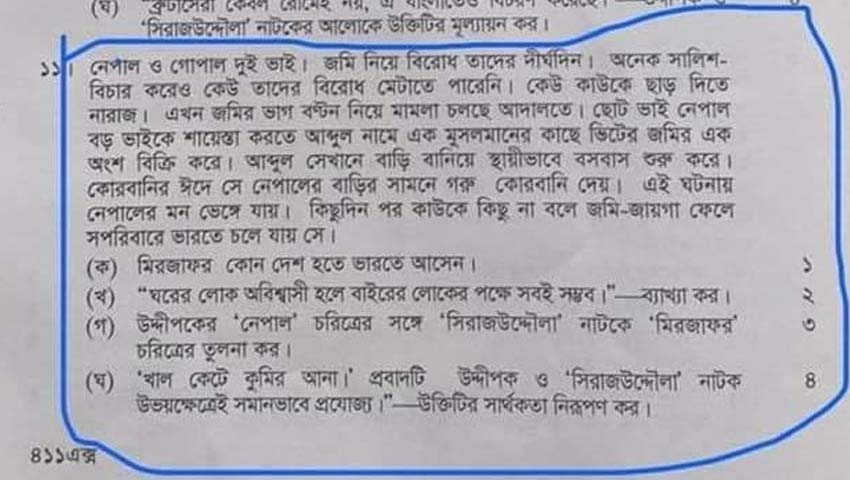 Controversy has arisen over the question paper of the HSC Bangla First Paper exam in Bangladesh. Allegations were made that the designed question paper hurt religious sensitivities. Prominent people say that this is a form of religious incitement. One of the questions in this paper is, “Nepal and Gopal are two brothers. They have been in dispute over land for a long time. Despite many arbitrations, no one could resolve their dispute. No one is willing to make concessions. Now the case regarding the distribution of the land is going on in court. The younger brother, Nepal, sells a part of the land of Bhit to a Muslim named Abdul to discipline the elder brother. Abdul built a house there and started living there permanently. He sacrifices a cow in front of Nepal’s house on Eid al-Adha. This incident broke the heart of Nepal. After a few days, he went to India with his family without telling anyone.”

This is the question of the Bengali first paper subject of the HSC and equivalent examination, which started on Sunday (November 6) in Bangladesh. This is how communal incitement has been given in this exam question paper under the Dhaka Board of Secondary and Higher Secondary Education.

Educationists and related groups said that although religious harmony and secularism are the main objectives of education in the country, a different picture has emerged in the question paper. The actual picture of the country is not like that. There are written instructions on how the question structure will be in the public examination and the orientation of the question makers and question setters. Even after this, religious incitement has been given in irrelevant contexts. This can spread hatred in society.

In the drama Sirajuddaula section of Dhaka Board Bengali’s first paper, Creative Question No. 11, the prompt directly confronts religion. Then the questions were asked: “(a) From which country did Mirzafar come to India?” (b) Everything is possible for the outsider if the person in the house is untrustworthy. (c) Compare the character “Nepal” in the question prompt with the character “Mirzafar” in the play “Sirajuddaula.” (d) The proverb “cut the canal and bring the crocodile” applies equally to the drama “Sirajuddaula.” – “Determine the merit of the saying.” Many relevant examples could have been drawn to stimulate creative questions and answers. But here, the question is framed as a communal provocation.

BRAC University’s distinguished Professor and Educationist, Dr. Mohammad Kaykobad, said, “It is not right to drag religion into the exam question paper.” All the information about selling land to Muslims and leaving the country creates instability and the wrong description in society. Such incidents are undesirable.

He said, “Better questions could have been asked.” The purpose of education is to develop a sense of humanity in the students. working to promote religious tolerance. Professor Kaikobad thinks that it is necessary to think a lot about exam questions.

Bangabandhu Sheikh Mujibur Rahman University of Science and Technology, Pirojpur Vice Chancellor Professor Dr. Kazi Saifuddin said to the Somoyer Alo, “The general guidelines for preparing the question paper say that no question can be asked that denigrates religion, caste, or any community.” It is forbidden to raise controversial questions on national issues, including the liberation war and language movement.

He said, “Issues that hurt religious beliefs should be avoided.” Religious incitement increases ills in society. It can spread hatred. He also added that “the constitution mentions non-communal Bangladesh.” How do such questions appear in public exams? The authorities need to be stricter.

Comilla secondary and higher secondary education board examination controller Dr. Md. Asaduzzaman said, “We did not set up the question of the Comilla board exam.” Any other board has set up this question. It is not possible to know which board made this question.

He said, “All general education boards submit their questions.” Then the inter-board lottery decides the draught question papers for the examination. After that, the question is sealed and sent to the board. Then the next morning, the question set is decided by a final lottery. In this case, there was no opportunity to see the question paper.