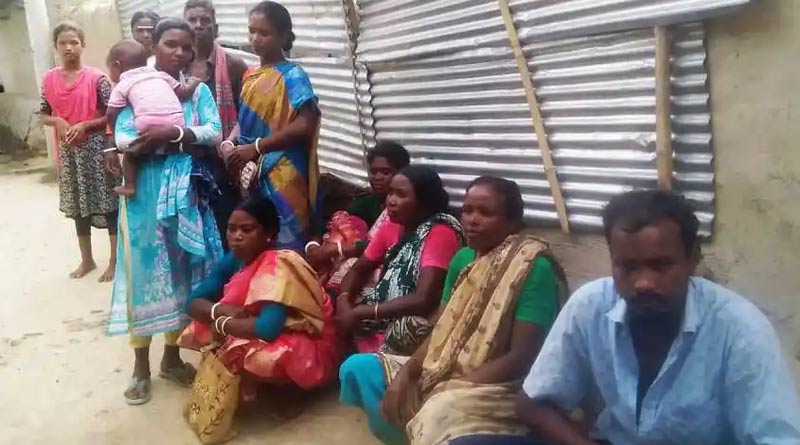 Recently, on the occasion of Mujib Barsha, the government of Bangladesh made a gift to the Santal Hindus of the country. But this time there is an allegation that their shelter was being occupied. The Santal Hindu community is now spending their days in other people’s backyards due to house encroachment. The area around Fazilpur of Dinajpur Sadar Upazila has become quite noisy around this incident. The victim Santals complained that some Islamist families of the local Chilmon Khan Dighi had occupied their houses. This has led to a clash between the two communities.

Santal Hindus complained about the matter to the Nirbahi officer of the upazila last Tuesday. In the written complaint, they said that after getting the house documents from the government, when they went to the house, the local Islamists threatened the Santal Hindus and locked the houses. Although the house deeds are with them, the houses are occupied by the Islamists. It is known that Chilman Khan Dighi covers an area of 9 acres. Houses were constructed for 52 Santal Hindu families under the shelter project on three banks of the Dighi. On the eastern half of the Dighi is a Muslim cemetery. The remaining part is the crematorium and temple of the Santal Hindus. On about an acre of land, Kodaildhoya Dighi is next to it. Already, 40 Santal Hindu families have moved into 40 homes.However, 12 families in the houses allocated in the third phase are not able to go home due to the obstacles of the Islamists.

Abhijit Basak, chairman of Fazilpur Union Parishad, said that the houses were allotted to Santal Hindus living across Chilmon Khan Dighi from the upazila. But some people forcibly occupied some of their houses. Since the victims are Hindus, the Upazila Nirbahi Officer was informed to settle the matter.

Local Santal Hindu representative Robin Murmu said, “more than a hundred Santal Hindu families have been living in Pargaon village for three generations, including Chilmon Khan Dighir Par. Among them, 167 people live in 30 families. All had mud houses. They were in a lot of trouble. The hardship was relieved to some extent after the government built the houses. 40 families were able to get into the house, but the remaining 12 families were not able to get up. A few families of Islamists occupied their houses for the sake of the cemetery.”

Previously, on September 9, police arrested Pritam Das, the Hindu leader of the tea workers’ movement in Sylhet, Bangladesh, on charges of insulting Islam. The police filed a case against him under the Digital Security Act, accusing him of insulting Islam. Pritam Das is currently in police custody.