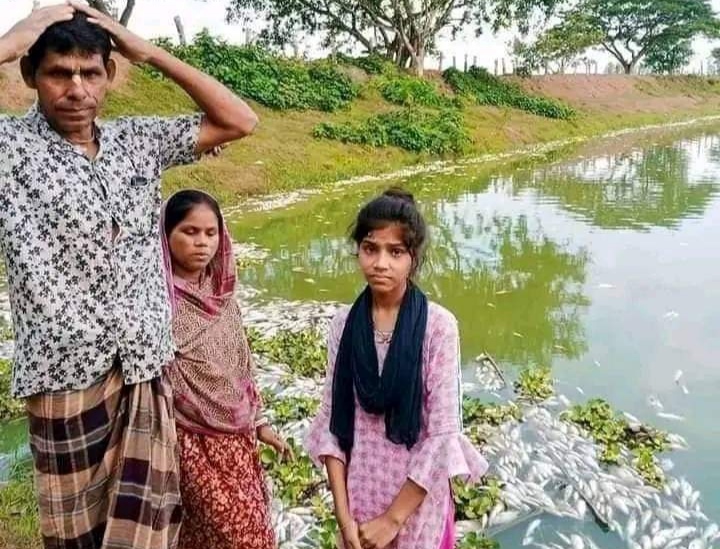 A horrific incident of Hindu torture in the Gaibandha district of Bangladesh has come to the fore. It is known that all the fishes in the pond of a Hindu man have been killed due to the previous enmity in Gobindogonj of the district.

Miscreants have killed fish worth about 25 lakh takas by applying poison in the pond. This incident took place in Aligram of Shakhahar Union of the Upazila last Thursday (August 18).

The affected Hindu fish farmer Mr Sukomal said that he has been making a living by farming fish by leasing various ponds in the area for a long time. He used to cultivate these fish on loan. Unknown miscreants poisoned his pond on Thursday night. About 15 tons of fish of different species in the pond have died. The estimated market value of these fish is Tk 25 lakh. A few bottles of poison were found on the banks of the pond.

The aggrieved Hindu fish farmer further said, “My family survives by farming fish in the pond. Miscreants have poisoned all the fish in my pond. What will happen to me now? How will I repay the debt? Enemies have put me on the way.” The police have not taken any action against anyone in this incident.

Earlier on August 12, in Khulna, Bangladesh, local miscreants destroyed all the fruit trees of a Hindu farmer due to a land dispute. It is known that local miscreants had cut down all the fruit trees of farmer Subrata Bhattacharya’s garden due to a land dispute in Paikgaccha, Khulna. In this incident, the victim Subrata has already filed a complaint with the police station.