Chittagong: Hindus showed black flags to the Foreign Minister for his offensive propaganda 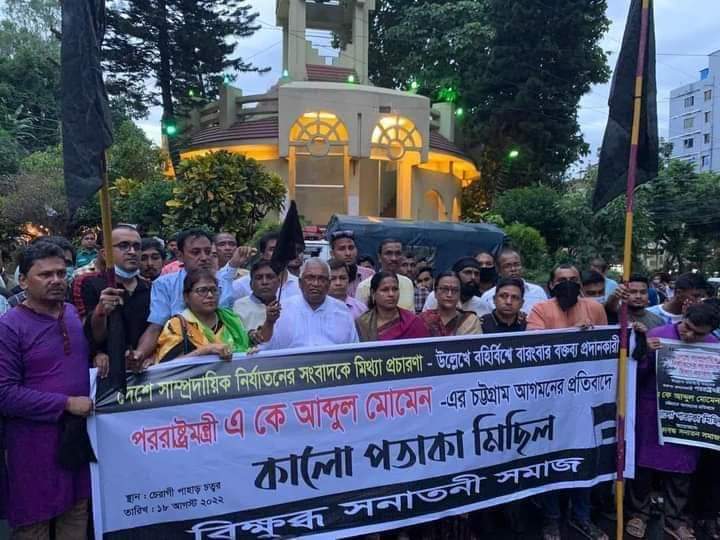 Chittagong: Hindus showed black flags to the Foreign Minister for his offensive propaganda

Two Hindu organizations of Bangladesh held a black flag march in Chittagong accusing Foreign Minister AK Abdul Momen of spreading the news of communal torture in Bangladesh as false. The program was held under the banner of ‘Agitated Sanatan Samaj’ and ‘United Sanatan Samaj’ on the occasion of the Foreign Minister’s arrival in Chittagong at Cheragi Pahar junction in the city on Thursday afternoon ( August 18).

The Foreign Minister came to Chittagong on Thursday morning to participate as a guest in the Sanatan Dharma Mahasammelan organized by the Janmashtami Celebration Parishad at Jatra Mohan Sen Hall in Rahmatganj of the city.

Advocate Rana Dasgupta, general secretary of Bangladesh Hindu Buddhist Christian Oikya Parishad, said in the rally before the march, “The protest is against the lies against the minority people will spread across the country.” He also demanded an apology from the foreign minister for his statement.

Rana Dasgupta said, “Foreign Minister has repeatedly preached outside the country that what is being circulated in the media about communal violence in Bangladesh or the events that Hindu people are protesting about, are false. He said that there was no communal violence in Bangladesh, and the media and minorities of this country lie about communal torture. I have protested this propaganda and lies of the Foreign Minister in the past, and I am still protesting.”

According to the Jatiya Hindu Mahajot, 79 members of the Hindu minority had been killed in Bangladesh till June 30 this year. From January 1 to June 30, 26 crores 2 lakh 30 thousand takas were extorted and 157 Hindu families and temples were looted, 620 people were threatened with death, 145 murder attempts, 183 people were injured and 32 people were missing.