Sylhet: Rumors of blasphemy in Sreemangal, local Hindus in fear 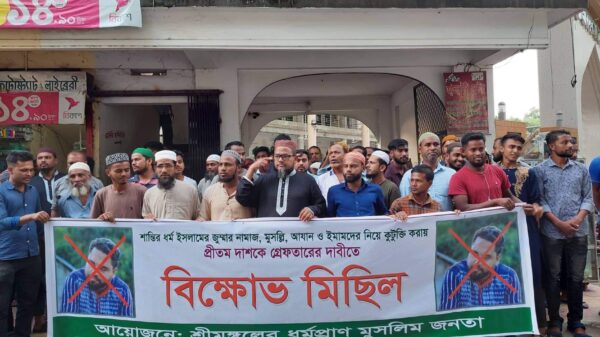 Sylhet: Rumors of blasphemy in Sreemangal, local Hindus in fear

A rally of radical Islamists was organized at Sreemangal in Sylhet yesterday. It is known that Islamists have instigated attacks on the homes and businesses of local Hindus from this gathering. There are also reports that local Islamists are looking for opportunities to attack.

It is known that the local Islamist group was trying to create an issue to attack the houses of the local Hindus. Finally, they created a communal issue with the help of local leaders and activists of the ruling party Awami League by spreading rumours of insulting Islam. A Hindu youth named Pritam Das posted derogatory posts on Facebook in the name of the religion of Islam and alleged a fanatical Islamist group.

It should be mentioned that some time ago, the local tea workers started a movement in Sylhet demanding an increase in wages. All these tea workers belong to the minority Hindu community. As a result of the agitation, the country’s Prime Minister Sheikh Hasina announced to increase in the wages of tea workers from Tk 120 to Tk 145. But Pritam Das and other agitating leaders did not agree on these low wages. They announced that they would refrain from attending work and continue their agitation for their fair wage demands. After that, the wages of tea workers were increased to 175 Tk.

Mainly because of this incident, Pritam Das fell under the wrath of the local leaders and activists of the ruling party and radical Islamist groups. As a result, the radical fanatic group and the local leaders of the Awami League created a communal issue and started conspiring against Pritam Das.

The Bangladesh government and local police administration there are well aware of the issue. Government party leaders themselves are involved in the communal conspiracy against Pritam Das. Currently, Pritam Das, his family and the local Hindu community are in a state of fear. Earlier it has been seen that during such communal attacks the police did not take any action but they stood by and played the role of spectators.

Previously a Hindu youth has been arrested again by police in Bangladesh for allegedly insulting Islam. A team of police arrested Jhumon Das from his house in Noagaon around 11:30 am on Tuesday (August 30) and took him to the Sullah police station of Sunamganj district. Jhumon Das Apan was taken to the police station for allegedly posting Islam insulting posts on Facebook.