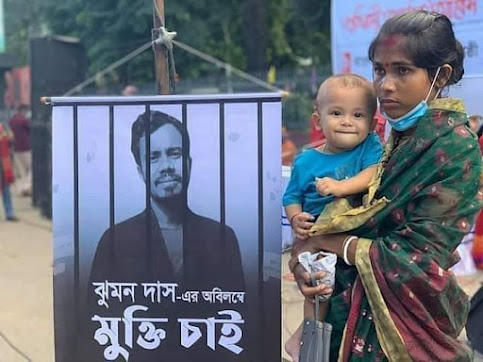 Jhumon’s wife Sweety Das claimed that Jhumon did not post anything insulting Islam. Instead, the police picked him up again to harass him again. However, according to the police, Jhumon Dash has been brought to police custody for questioning to prevent any untoward incident from happening like before.

Incidentally, on March 16 last year, the police arrested Jhumon Das on the same night for posting on Facebook about Mamunul Haque, an Islamic leader of Hefazate Islam Bangladesh. The next day Muslim residents of various neighbouring villages attacked Noagaon with sticks and vandalized and looted at least 90 Hindu houses and 4 temples.

On March 22, 6 days after the arrest, the Sullah Thana police filed a case under the Digital Security Act against Jhumon Das as the plaintiff. Jhumon was released on conditional bail on September 28 after spending almost 6 months in jail in this case.

Abu Sufian, assistant superintendent of police of Sunamganj district police’s Dirai circle, said about the re-arrest of Jhumon Das, “The donation box of a mosque was installed in front of a temple in Sirajganj. A few days ago, Jhumon made a post on Facebook saying that the donation box of the mosque is in front of the temple. In that post, like 6-7 lines, insulting words about Islam were written. He was brought to the police station for talking about it.”

Meanwhile, in that controversial post of Jhumon Das, it can be seen that he did not write any words insulting Islam. Instead, he protested against the modern Jizya tax system being imposed on the Hindus of Bangladesh in the name of the Mosque donation box at the temple gate. As a result, it is clearly shown that Jhumon Das has been accused of insulting Islam for harassment just because he is a Hindu. Since this incident, there is widespread anger in the Hindu community of Bangladesh.

Earlier on July 31, attacks on the Hindu community were being planned using Facebook in Sylhet. It was known that a fake ID had been opened in the name of a Hindu youth named Kishore Goswami of Sreemangal in Sylhet and slanderous posts about Islam were being made from it. Using them, local Islamists were planning to attack the local Hindu community by accusing them of insulting Islam. The aggrieved Hindu youth had already lodged a written complaint with the police in this regard.