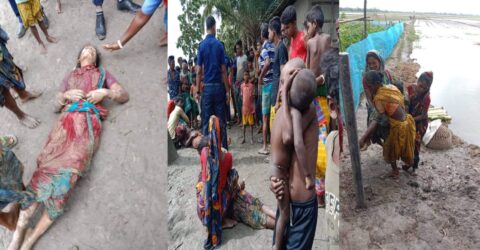 In Shyamnagar of Satkhira district in Bangladesh, the local cadres of the ruling party had carried out a hellish rampage in the Hindu Munda village. Bilasi Munda, Rina Munda, Sulata Munda and Narendra Munda of the Hindu Munda community were injured in this attack. The attack took place at Dhumghat Hindu Munda village of the Upazila at around 9:30 am on Friday, August 19.

The locals said that the attack was carried out by about two hundred attackers from Bangshipur of the Upazila under the leadership of Rashidul Sardar and Ebadul Sardar to seize the land of the local Hindu Munda community.

Those involved in the attack are said to be cadres of student and youth organizations of the ruling party Awami League. The injured were rescued and admitted to Shyamnagar Upazila Health Complex around noon. The attackers left the spot after Shyamnagar police reached the spot after receiving a 999 call.

The attackers besieged the families of Hindu Munda village with more than 200 lathiyals. They then destroyed the seedbeds of the Hindu Munda community’s cultivated land by ploughing the disputed eight bigha land.

Fonindranath, a victim of the attack, complained that suddenly around 9:30 on Friday morning, about 200-250 attackers surrounded their Hindu Munda village. At that time, the attackers kept each family trapped inside their houses and started cultivating their land with a mill plough.

At one point, the local Hindu Mundas somehow freed themselves from the blockade and tried to stop the attackers. At that time they were severely beaten by the attacking Awami League cadres. Rina Munda, Sulata Munda and Bilasi Munda and Narendra Munda were seriously injured in this attack. The assailant Awami League cadres left the scene when the police reached the spot after a long time of calling 999. Before that, they completely destroyed the seed beds made by the local Hindu Munda community.

Krishnapada Munda, executive director of Sundarban tribal women’s organization SAMS, said that three Hindu Munda women, including one man, were victims of the hellish violence of the local Awami League cadres, and had been admitted to the Shyamnagar hospital. He also said that there is a government ban on the transfer of the tribal Hindu Munda community’s land. However, the matter is under trial in court as some local people had claimed the ownership of the said land by resorting to fraud.

In a separate incident on August 21, local miscreants had vandalized Hindu temples and Devi idols in the Rahbal area of Shibganj, Bogra. The miscreants entered two local temples in the dark of night. After that, the attackers vandalized the Devi idols established for daily worship in the two temples. They also stole the donation box from the temple.