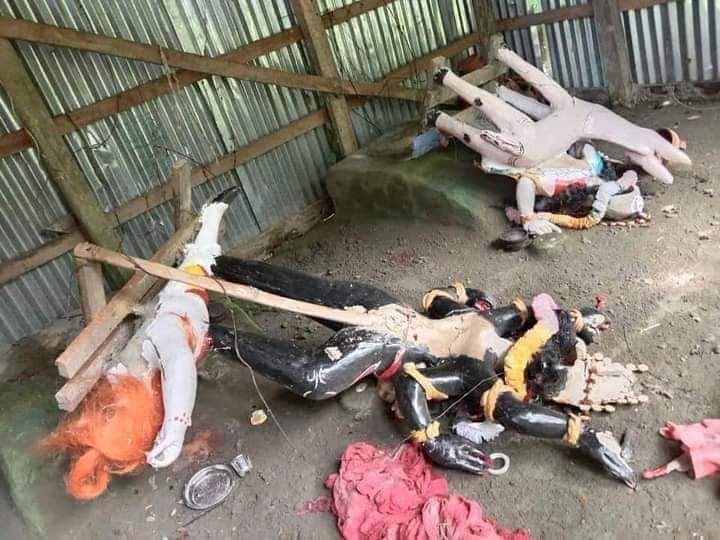 The local Hindu community is in panic after another attack on a temple in Pirojpur, Bangladesh. According to the report, this incident of vandalizing Kali and Shitala Devi idols took place in a temple of Nazirpur Upazila in the Pirojpur district. Additional SP (Sadar Circle) Khairul Hasan said that the incident took place at North Hoglabuniya Sarvajanin Kali and Sheetala temple in Shakarikathi Union of Upazila on Saturday (August 6).

General Secretary of Nazirpur Upazila Hindu, Buddhist, Christian Oikya Parishad, Timir Halder said that “there is no permanent priest or servant of this temple as the puja is held once a year. In the morning, locals found the idols of Kali and Shitala Devi broken and left inside the temple. When the matter was reported to the police, they came to the spot.”

Locals believe that the miscreants who vandalized the idols of the temple late on Saturday night. They managed to escape from the temple easily after vandalizing the idol on the chance that no one was in the temple. Also, due to the lack of CCTV cameras in the temple area, there is doubt about identifying the culprits.

Earlier, An incident of idol vandalism had taken place in Sarvajanin Sri Shitala temple of Kathuliya village in Durgapur union of Pirojpur Sadar Upazila in Bangladesh. Police arrested four Muslim teenagers in this incident. On the afternoon of Monday (August 1), the four Muslim teenagers were arrested on the charge of vandalizing idols. Pirojpur Sadar Police Station Officer-in-Charge (OC) A. H. M. Masuduzzaman had confirmed this information.