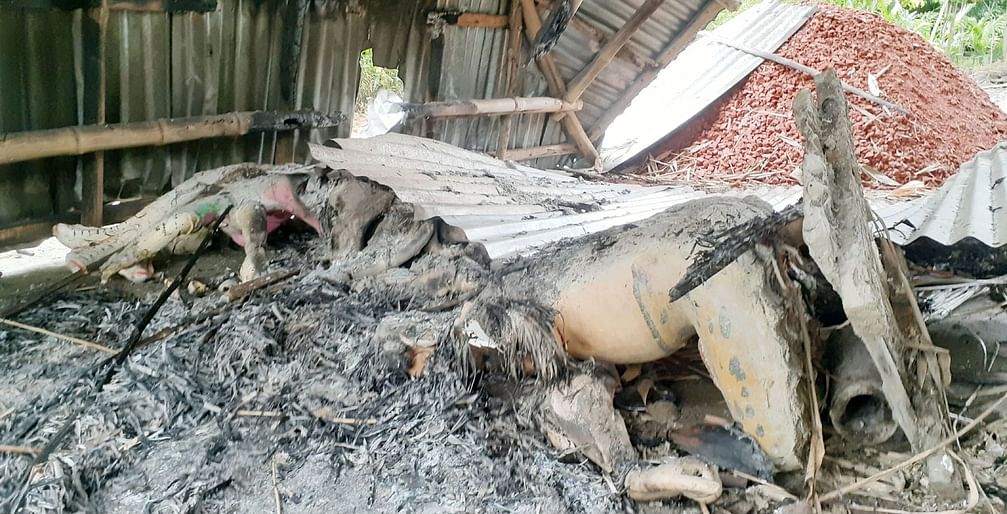 An incident of temple vandalism and arson took place in the darkness of night in Phulbari Upazila of Kurigram. According to the report, this incident took place at the temple near Ratikant Ray’s house in Naodanga village in Naodanga union of the Upazila between 1:00 am and 2:00 am yesterday. Kurigram Superintendent of Police Syeda Jannat Ara visited the spot on Tuesday afternoon.

It has been found that Ratikant Roy’s grandfather, Shirish Chandra Roy, sold 60 hundred acres of land to Abdus Samad Ghatial in the Mogulhat area of Lalmonirhat district about 35 years ago. The wife of Samad Ghatial and his two sons had been living there for a long time. In the meantime, two sons of Samad had started demanding the temple land. There was no decision in the arbitration meeting for a long time.

Samad’s elder son, Shahidul, went to cut bamboo near the temple on Monday afternoon (8 August). After he cut the bamboo, Ratikanta and his brother Shivcharan forbade him from cutting the bamboo. This led to an argument between the two parties. Later in the night, the idols of the temple were vandalized, and the people of the Hindu community were shocked.

Ratikant Roy, a member of the founding family of the temple, said, “My father and grandfather have been performing worship in the temple. In the middle of the night, I woke up to the call of the neighbours and found that the temple had been vandalised and set on fire. 40 per cent of the temple was burnt before it was put out. We did not see who did this. We want justice for this.”

Fazlur Rahman, Officer-in-Charge (OC) of Phulbari Police Station, said, “We got the information at around 10 am and reached the spot at 10:30 am. Talking to everyone here, it is estimated that miscreants vandalised and set fire to the temple between 1 am and 2 am. However, it is not known who caused this incident till now.”

OC also said, “I came here and learned about the land dispute. We have spoken to both parties. I have informed the affected people to file a case at the police station. They said that they would discuss it among themselves and then file a case. If there is a case, action will be taken after investigation.”

Earlier on 6 August, an incident of vandalizing Kali and Shitala Devi idols took place in a temple of Nazirpur Upazila in the Pirojpur district. Additional SP (Sadar Circle) Khairul Hasan said that the incident took place at North Hoglabuniya Sarvajanin Kali and Sheetala temple in Shakarikathi Union of Upazila on Saturday (August 6).