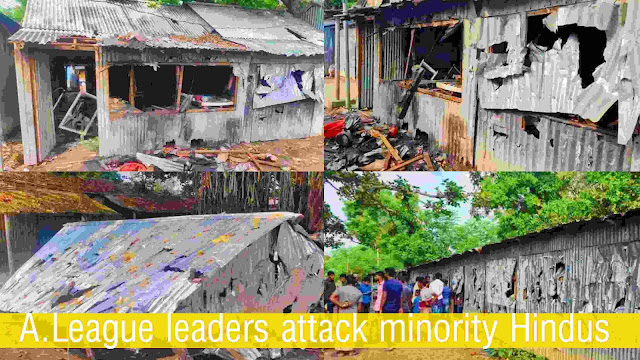 Houses and business establishments of the Hindu community were vandalised and looted in the Itali Union area of Singra Upazila of Natore district in Bangladesh. The attack is said to have been directed by Union Parishad Chairman and Awami League Joint General Secretary Ariful Islam Arif.

During this time, there were allegations of attacks, vandalism, looting, and arson on the houses and shops of the Hindu community of Pakuria village.

This incident happened last Monday (Sept. 26, 2022) in the afternoon. The attackers vandalised 2 Hindu houses and 6 Hindu shops. The attackers then took away the loot in truckloads.

Last Monday, from 4 p.m. to 6 p.m., Arif, the chairman, himself, led this attack. Since the incident, people of the local Hindu community have been suffering from extreme insecurity, even fearing to step out of their homes.

The Hindu victims tried to get police help by calling 999. But Singra Thana Police did not receive the call. The police visited the scene in the evening after the attack. No one dared to report the news for fear of terrorists. The Central Committee of Bangladesh National Hindu Mahajot has strongly condemned and protested this incident and demanded exemplary punishment of the culprits.

Previously on 23 September, a Hindu temple and Durga idols were attacked and vandalised in Khulna, Bangladesh. The attack and vandalism took place in the Nalta Saha neighbourhood of Tala Upazila in the Satkhira district of Khulna. This attack was carried out by unidentified miscreants late at night.