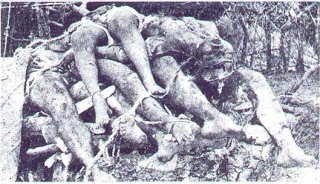 “There were piled up dead bodies. Dead Kids’ on dead mum’s laps. Wives hugging their beloved husbands to protect them from killer bullets. Dads’ hugging their daughters to shield them. Within a flash they all were just dead bodies. Blood streamed into the Bhadra river, it became a river of corps. A few hours later when the Paki bastards ran out of bullets, they killed the rest of the people with bayonet.”