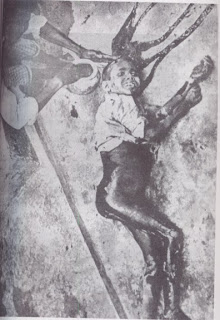 Omar would proudly say, “During the day I am Omar, at night I am Shimar( legendary executioner famous for extreme cruelty). Don’t you see my dagger? There are countless Kafirs (heretics) on it.”

‘….The people of Narail can bear witness to the reign of terror, the inhuman atrocities, inflicted on them after (General) Yahya let loose his troops to do what they would. After March 25, many people fled Jessore in fear of their lives, and took refuge in Narail and its neighboring localities. Many of them were severely bashed by the soldiers of Yahya and lost their lives. Very few people ever returned. Bhayna is a flourishing village near Narail. Ali Akbar is a well-known figure there. On April 8, the Pakistani troops surrounded the village on the pretext that it was a sanctuary for freedom fighters. Just as fish are caught in a net so too were the people of this village all assembled, in an open field. Then everyone- men, women, and children–were all forced to line up. Young men between the ages of 25 and 30 were lined up separately. 45 people were shot to death on the spot. Three of Ali Akbar’s brothers were killed there. Ali Akbar was able to save himself by lying on the ground. But no one else of that group was as fortunate. Nadanor was the Killing field. Every day 20 to 30 people were taken there with their hands tied behind their backs, and killed. The dead bodies would be flung into the river. Apart from this, a slaughter house was also readied for Bengalis. Manik, Omar, and Ashraf were sent to Jessore Cantonment for training and then brought to this slaughter house. Every day they would slaughter 9 to 12 persons here. The rate per person was Taka ten. On one particular day, 45 persons were slaughtered here. From April 15 to December 10, the butchery continued. It is gathered that 2,723 people lost their lives here. People were brought here and bashed, then their ears were cut off, and their eyes gouged out. Finally they were slaughtered… : The Chairman of the Peace Committee was Moulana Solaiman. With Dr. Abul Hussain and Abdul Rashid Mukhtar, he assisted in the genocide.