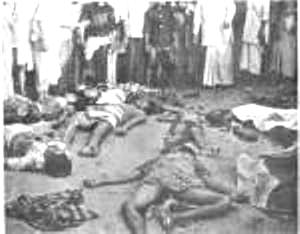 “For month after month in all the regions of East Pakistan the massacres went on,” writes Robert Payne. “They were not the small casual killings of young officers who wanted to demonstrate their efficiency, but organized massacres conducted by sophisticated staff officers, who knew exactly what they were doing. Muslim soldiers, sent out to kill Muslim peasants, went about their work mechanically and efficiently, until killing defenseless people became a habit like smoking cigarettes or drinking wine. … Not since Hitler invaded Russia had there been so vast a massacre.” (Payne, Massacre, p. 29.)