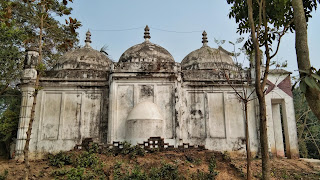 Sultan Rukunuddin Abul Mujahid Barbak Shah (1459–1474) was the successor of Sultan Nasiruddin Mahmud Shah and the second sultan of the Mahmud Shah dynasty, the Sultanate that ruled Bengal from 1435-1487 CE.

He was the governor of the Saptagram region till 1459 CE. Saptagram or Satgaon was a major port and the chief city of southern Bengal, in ancient and medieval times. It currently falls under the the Hooghly district of West Bengal. 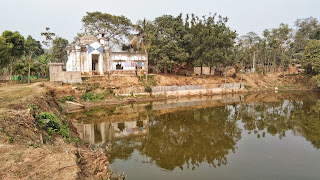 The position of the monument in line of the pond

According to the Risalat-us-Shuhada(a treatise in Persian written by Pir Muhammad Shattari in 1633 CE dealing with the life and martyrdom of Shah Ismail Ghazi, who was beheaded at the orders of Barbak Shah), Ruknuddin had sent his general Shah Ismail Ghazi to fight the king of Gajapati Kingdom of Kalinga, who had taken southern Bengal from the Sultan and captured the fort of Mandaran. Ismail Ghazi’s army defeated the Oriya army and recaptured the fort.

Ghazi was also sent against the king of Kamarupa (Assam) but Barbak’s army was defeated. However, Ghazi was somehow able to convince Kameshwar, the king of Kamarupa to accept Islam. After that Barbak Shah became his overlord. But soon, a rumour broke out that Ghazi was trying to carve out an independent kingdom for himself in Kamarupa and conspiring with Kameshwar. Ismail Ghazi was beheaded at the orders of Barbak and his head and body were buried at two different places. 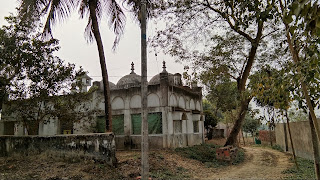 Frontal view of the monument.

After this, Barbak Shah invaded Mithila (present-day Janakpur) and conquered the region. He appointed Kedar Rai as the governor of that region.

His ruling area extended from Kamarupa to Karatoya river in north-east. He invaded and conquered the fort of Hajiganj and surroundings at Tirhut in 1468 CE. Thus his kingdom extended to Buriganga. Sylhet was under Barbak’s jurisdiction according to the Hatkhola inscription. According to the Mirzaganj inscription, the Bakerganj area was also under in his sultanate. He established his authority in Chittagong or Chattagram. 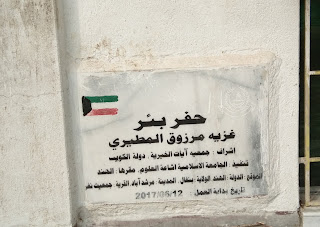 He made his way to Murshidabad, which was possibly part of the Brahmapur (currently Berhampore) area then and called something like Mokshapur. A prominent navaratna style mandir was then converted to a masjid on the orders of Barbak Shah and later a dargah after his demise, possibly an initiative of his son and successor Sultan Yusuf Shah. 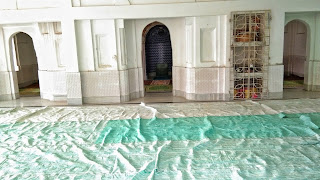 The monument is currently being renovated as of 12th January, 2021.

Chuna Khali falls under the Prasadpur Gram Panchayat of Jiaganj tehsil, Murshidabad district. Now here’s what grinds our gears – Jiaganj and Azimganj are located on the opposite banks of the river Bhagirathi. The ancestral or original name of Jiaganj or Ziaganj is Baluchar. The name was changed to Jiaganj only after Akbar came to the district and named it Maksudabad (and then later it became Murshidabad under Murshid Kuli). So what was the name of the district currently known as Murshidabad? What was it’s name before Maksudabad? If Jiaganj was Baluchar and Barbak built a masjid there in the middle or late 1400s, then Akbar did not carve out a city or district out of forests. There already existed a full fledged town, with Hindu and Jain monuments and temples/deuls. This is quite evident from the abundance of Jain deuls and temples in today’s Jiaganj (originally Baluchar).

From Henry Beveridge’s “Old Places in Murshidabad”, published in the Calcutta Review 1892, we come to learn that, ” Berhampore (Baharampur) seems to be a corruption of the Hindu name of the place Brahampur, i.e. the city of Brahma. Brahmapur is the name which the original mouza, or village, bears on the collector’s revenue-roll. Probably the name comes from the place having been a settlement of Brahmanas. One of the bathing places in the river is called Bipraghat or Brahman’s ghat. The name does not appear to be in any way connected with the Muhammedan name Bahram. There is a place about 5 miles to the north-east and on the high road to Murshidabad, which has the very similar name of Baharamganj. Probably this has the same origin as Berhampore, though it may be connected with Bahram Jang, a son of Muhammad Raza Khan, otherwise Muzaffar Jang”.

It is the writer’s well researched assumption that just like Brahmapur and Baluchar, Murshidabad or Makhsudabad is too a converted name of a pre-existing township, if we were to guess the name, we would go with ‘Mokshapur’, since it was Islamic style to keep a similar name most of the times. However, it could’ve been something else as Baluchar was converted to Jiaganj/Ziaganj.