According to the Odia inscription, this ancient complex was built in 1438–1469 during the rule of Surya Vamsi king of Odisha Gajapati Kapilendra Dev. There are some relatively newer (late 17th century) structures which have been built on top. This is the doing of Mohammed Tahir, who was working upon the orders of Aurangazeb. Aurangazeb had ordered for all prominent Hindu temples to be either demolished or converted to masjids. The stone inscriptions upon the newer structures point to the year 1691 CE.

This monument is protected under the ASI, however, there is not much data available about this fort. It’s quite an ancient building complex. One can easily tell that this used to be a Shakta temple by looking at the sacrificial altar. Most of the locals are either not aware of the history of this place or have been suppressed from telling it to outsiders

In 1568, the Afghan Sultanate of Bengal and Bihar invaded Odisha which included the undivided Midnapore district of West Bengal. Later, Mughals occupied Odisha after defeating the Afghans of Bengal in the Battle of Tukaroi in 1575. They divided Odisha Subah into five Sarkars and this part was included in the Jalesar Sarkar. Although religiously motivated invasions by Mughal generals into Odisha happened from time to time, these became more frequent during the reign of Aurangzeb. Aurangzeb’s forces plundered many temples of Odisha, including Midnapore. Aurangzeb also issued a fatwa to demolish the Jagannath temple. The Kurumbera fort and temple complex were attacked and converted to a mosque during the reign of Aurangzeb. In 1752, the Midnapore area was separated from Odisha proper and merged with Bengal. 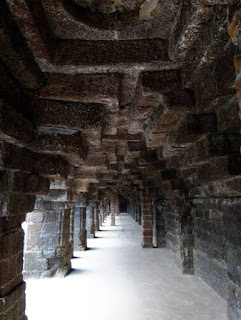 Structures Inside the Fort

The structure resembles the medieval architecture of Odisha, while also incorporating elements of later Mughal architecture. The fort contains a three-domed structure over a platform, along with a sacrificial altar. Although most parts of this fort and its structures are in ruins, the ASI has taken considerable effort to protect the structures from collapsing by using cement and lime mortar to shore up the external pillars. The pillars support a roof which is shaped as a flower. Circular pillars were used to the rear of the left-dome. This fort’s architecture also shares great similarity with Raibania Fort, in the Balasore district of Odisha.

An inscription about its usage is located directly behind the domed structure.