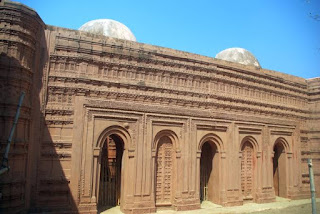 Birbhum (literally meaning land of the bir or brave) was ruled by the Malla (Mallabhum) rulers who often had the title Bir or Bir Singha Dev. Rajnagar was one of their royal capital which was founded by Bir Singh, a great Hindu Raja in ancient times on whose name the district Birbhum was formed. In 1206, Rajnagar was occupied by Muhammad Shiran, a General of Muhammad Bakhtiyar, and annexed by Ali Mardan, on 1211. However, Pathans do not seem to have enjoyed undisputed control over the entire district or area. At least the western part of the district, with Rajnagar as its capital, seems to have been ruled by the descendants of Bir Singh, the Bir Rajas. The rent roll of Todar Mal leads to the conclusion that by the middle of the 16th century the entire district was brought under the administration of the Mughals through numerous wars raged on this ‘Gateway of Bengal’. The later Muslim Zamindars of Rajnagar, known as “Nagar Raj”, were feudatories of the Mughals.

The Malla and Bir kings had warded off the barbaric Pathans for centuries and had several magnificent terracotta temples and monuments to their credit. However, not taking lessons from the history of King Dahir of Sindhu, they had employed Pathan soldiers in their army. It is said that “treachery runs in the Pathan’s blood”.  In 1600 CE, a Pathan military officer named Joned Khan organised a coup-d’etat and after treacherously killing the Bir king, usurped power and converted one of the most magnificent terracotta mandirs in to a masjid. The motifs on the walls of this apparent Masjid has designs that are not acceptable in Islam. They’re clearly Hindu designs (e.g. human, animal or floral).