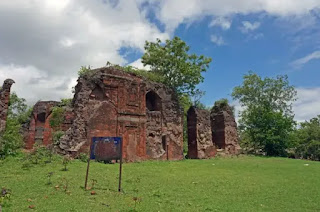 Located in Natunhat, Mangalkot PS, 33 kms away from Bardhaman railway station, the Hussain Shahi Masjid is yet another precedent of forceful Islamic occupation of Hindu religious and cultural monuments.

This dilapidated masjid lies on the banks of a pond and sits top of a mound. There is an unmarked mass graveyard in front which may be the mark of Islamic barbarism in Bengal.

This mosque which was built in 1510 by Sultan Hussain Shah who is known to have converted several mandirs of the area in to mosques.

The masjid has only its front and back walls left. But the floral motifs are still visible on them.

These motifs (floral, animal, human) are not generally acceptable in Islam and are very common to Hindu and Buddhist architectures.

There are more evidences that support the claim that this mosque was actually a mandir or Hindu temple among which there was a plaque which contained the attribution of the temple to Chandrasena, this was removed and kept at the khanqah of the contemporary sufi preacher Shaykh Hamid Danishmand of the Naqshbandi order.