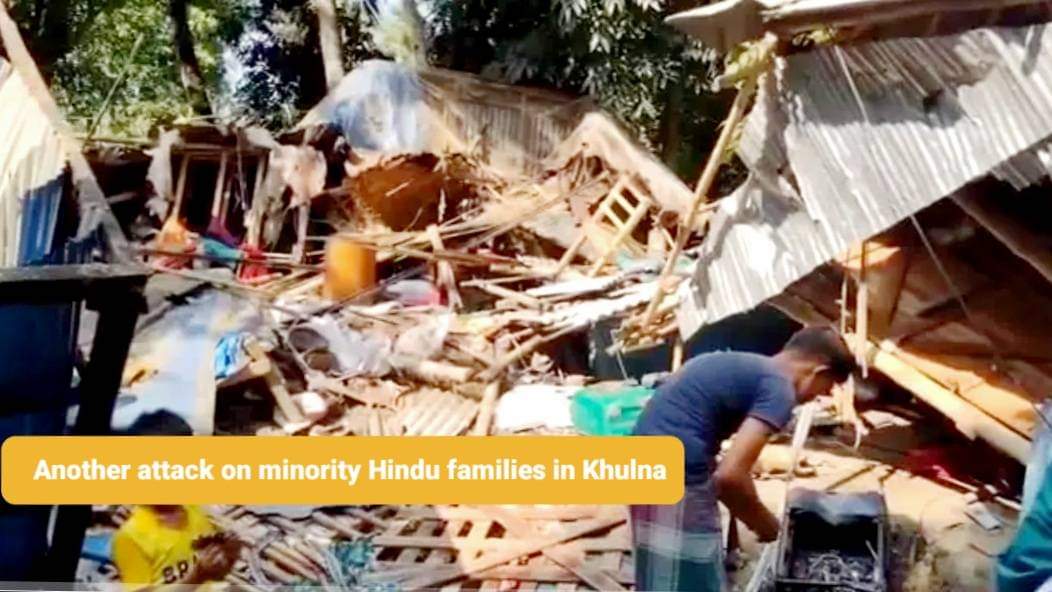 On Wednesday, November 16, a Hindu family was ambushed in filmy style in Dumuria, Khulna, and their homestead, kitchen, cowshed, paddy shed, and all their furniture were vandalized and looted. This incident happened like the 1971 Pakistani atrocities at the house of Bikash Nandi in Sikdarpara village of Gutudia Union of the Upazila at around 11 a.m. on Wednesday. Aranghata police station has already arrested the mastermind of this incident, Tuku, from the Deyana area.

It is known that Vikas Nandi (50) has been living with his family in Sikdarpara village for a long time. They have a long-standing dispute over this land with the local Tuku gang of the Daulatpur Deyana area. Because of that, around 10:30 a.m. on the day of the incident, around 150 local miscreants came across the canal with domestic weapons and attacked the homestead in a filmy style.

According to local member Palash Hawladar, the attack has surpassed the brutal incidents of 1971. In just 15 minutes of the attack, the attackers destroyed six houses and mixed them with the ground. I have never seen such violent attacks on Hindus in broad daylight. In fear, the locals did not even dare to open their mouths.

In this regard, the Aranghata police station officer in charge, Md. Ohiduzzan, said that “a tragic incident happened in Sikdarpara village. A homestead of a Hindu family was vandalized and looted in the surprise attack. Mastermind Tuku, involved in that incident, has been arrested.” Local Hindus are both angry and scared by the attack. The local Hindus appealed to the local administration and public representatives to ensure that all the assailants involved in this incident are brought under the law through a fair investigation and exemplary punishment.

Previously in Khulna, a Hindu woman named Kavita Rani was brutally killed by beheading after being caught in the trap of love jihad. Her dismembered body was recovered from a rented house in the Sonadanga Thana area of the Khulna metropolis in Bangladesh. RAB-6 confirmed the identity of Kavita Rani on Monday (November 7). The deceased Hindu woman Kavita Rani is the daughter of Kalipad Bachar of the Kuter Bill area of Satkhira Ashashuni.