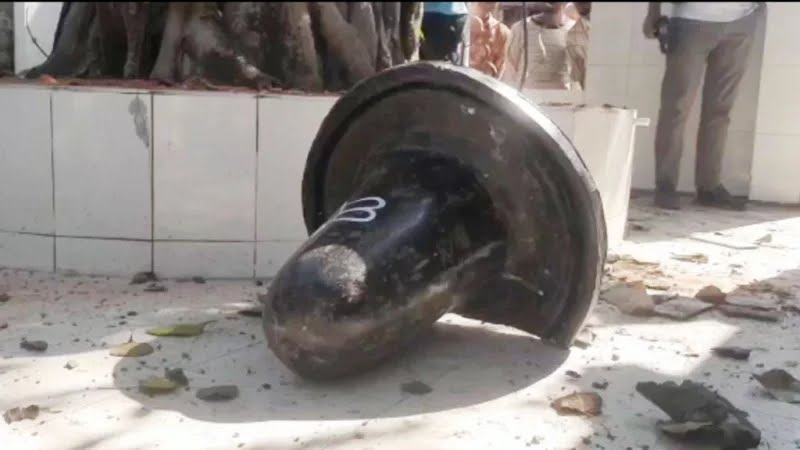 Unidentified miscreants have attacked the Sarvajanin Shiva Mandir in the Teesta Bazar area of Gokunda Union of Lalmonirhat Sadar Upazila today morning (18 November). The miscreants vandalized the Shiva Linga and looted money from the donation box of the temple. Expressing their anger, the local Sanatani people demanded the arrest of the culprits.

The local Hindus said that the temple is about 200 years old. This morning, the devotees found that the three Shiva Lingas and Trishuls of the temple had been vandalized, and the money from the donation box had been looted by unidentified miscreants. After that, when the incident became known, the Sanatani people from around came and gathered at the temple.

At that time, Makhan Lal Das, a resident of the Teesta area, said, “We came to know in the morning that the temple had been vandalized and looted. We demand a fair investigation and trial of this incident.”

Surendra Prasad Gupta, President of Teesta Bazar’s Sarvajanin Shiva Mandir, said, “The Shiva Lingas of our temple have been vandalized. All the money in the donation box was taken. This incident was done by unknown miscreants early this morning. CCTV footage shows the vandalism. We want the culprits to be brought under the law and arrested as soon as possible.”

Hiralal Roy, President of Lalmonirhat Puja Udyapan Parishad, said, “This is a very sad incident. We do not know who did this. However, I demand that those who caused this heinous incident be arrested and brought under the law.”

In this regard, Superintendent of Police Mohammad Saiful Islam said, “Some miscreants entered between 3:30 and 4:30 last night, vandalized the Shiva Lingas, and looted money from the donation box. As soon as I came to know of the matter, I visited the spot. The temple is next to the road, and the lack of security has given miscreants the courage to carry out this incident. We have already collected some CCTV footage. The footage will be analyzed, and the culprits will be brought under the law quickly.”