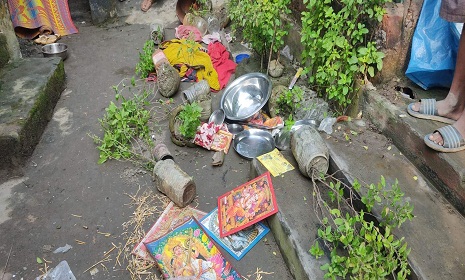 10 members of a minority Hindu family were injured in an attack by a Jubo League leader over a land dispute in Bhuyapur, Tangail district, Bangladesh. A few Vigrahas in their house were vandalized. Four of the injured Hindus are being treated at Bhuyapur Upazila Health Complex. The attack took place on the house of Subhash Ghosh and Pradeep Ghosh of Ghoshpara in the Koshtapara area of the Upazila on Friday morning. Accused Jubo League leader Khorshed Alam is the former president of Gobindasi Union Jubo League, which is the political youth wing of the ruling party Awami League in Bangladesh.

Locals said that Jubo League leader Khorshed Alam had been in conflict with local Hindu leader Subhash Ghosh over land for a long time. At one point on Friday morning, Khorshed Alam and his brother Arshed Ali attacked the houses of Subhash and Pradeep Ghosh, who belonged to the minority Hindu community. At that time, they vandalized the house and the Vigrahas. When the victim Hindu family tried to stop it, the attackers beat and injured five people. Among them, the injured Ratan, Nikhil, Ashok, and Shanta Ghosh have been treated at the hospital.

Injured Amlesh Ghosh said, “At least 7-8 attackers of Khorshed Alam attacked us three times and vandalized our houses and Vigrahas. They beat and injured at least 10 of us, including women. I want justice for this unjust torture. We are preparing to file a case at the police station.”

The accused ruling party leader, Khorshed Alam, said that “the matter is going on with them regarding the boundary of the house. There were no assaults or beatings. They attacked us and abused us. They are spreading lies.”

Santosh Kumar Dutta, Secretary of Bhuyapur Upazila of Citizens for Good Governance (SUJAN), said that “we strongly condemn and protest the attack on Hindu houses and temples in broad daylight. The Criminals need to be properly prosecuted.”

Bhuyapur Police Station OC Faridul Islam told reporters that “the attack occurred due to a land dispute. Neither party filed a written complaint with the police. Legal action will be taken if complaints are received. Police were dispatched to the scene. Currently, the situation is calm in the local area.”

Previously on November 16, a Hindu family was ambushed in filmy style in Dumuria, Khulna, and their homestead, kitchen, cowshed, paddy shed, and all their furniture were vandalized and looted. This incident happened like the 1971 Pakistani atrocities at the house of Bikash Nandi in Sikdarpara village of Gutudia Union of the Upazila at around 11 a.m. on Wednesday. Aranghata police station has already arrested the mastermind of this incident, Tuku, from the Deyana area.