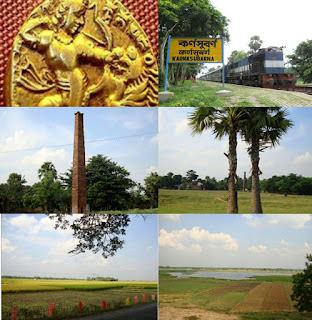 The two ancient eastern kingdoms of Bharatabarsha, Anga and Vanga finds mention in the Vedic literature of Brahmanas and Aranyakas (800 to 600 BCE).

Anga was located at the east of Magadha and its capital was Champa (currently known as Bhagalpur). The Mahabharata mentions the kingdoms of Gandhara, Madra, Bairat or Virat, Sindhu, Kasipa, Hastinapur, Indraprastha (built by the Pandavas), Mathura, Panchala, Kasi, Koshal etc. These were all independent kingdoms that came together to fight the great war of Kurukshetra.

In 1962-63, the Calcutta University’s Department of Archaeology, led by Dr. Sudhir Ranjan Das planned an excavation in a site at Jadupur, Rangamati Gram Panchayat of Murshidabad and uncovered the ruins of the legendary Buddhist monastery known as Rakta-mrittikā Mahavihara which first finds mention im Xuanzang’s (Hiuen-Tsang) travelogues.

Karnasubarna was the capital city of king Shashanka’s Gauda. Shashanka (Sasanka) is believed to have introduced the Bengali calendar known as Bangabda in 593 CE. It was 12th of April, a Monday. Sasanka, being a devout Shaivite, intentionally chose this day as Monday is Moon’s day (Moon’s day = Monday, Somabar, Soma = moon) and it is dedicated to the lord Shiva.

Surrounded by high mounds and sporting fertile soil all over, Karnasubarna attracted many merchannts, explorers and other fortune seekers.  The great unpredictable river Bhagirathi provided many of the amenities necessary for the growth of a city, including a ship sail route. It is no surprise that King Shashanka chose Karnasubarna as his capital city. The unearthing of a stone plaque from a Buddhist temple in Malay peninsula, belonging to the 4th century CE; proves that Buddhism had found its way among the general population of Banga especially Karnasubarna, well before the 4th century CE.

Karnasubarna reached its full potential during the reign of Shashanka and became a prosperous administrative, military and religious centre. But this urban township’s fame was short lived. Its decline began right after the demise of Shashanka and it was soon forgotten and buried in the sands of time.

Nagendranath Basu in his 1937 book “Bonger Jatiya Itihash (Kayastha Kando)” writes that Shashanka was the descendant of Raja Karnadeva, from whom the city of Karnasubarna gets its name). 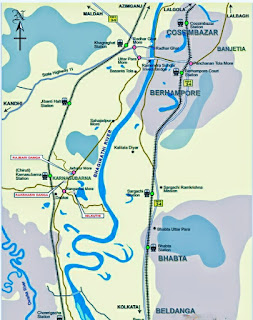 The former head of the department of Archaeology Calcutta University, Dr. Sudhir Ranjan Das goes on to say that the urban township of Karnasubarna or Kansona consisted of these 18 villages or mouzas which are now part of the Berhampore(Brahmapur>Bahrampur) Sub-Division, Murshidabad District.

[*all figures in approximate values]

Most of these mouzas still exist under Berhampore as gram panchayats.

Spread of Buddhism in Karnasubarna

During initial years of Buddhism, the monks of the Sangha, lived a nomadic life. They wandered hither and thither and lived a life of asceticism. They did have any steady residence as it’s not suitable for a monastic life. They built and resided in simple wooden or bamboo huts wherever they went. But they did not starve as in the Sanatan culture it is considered a great virtue to give alms or serve food to rishis and sannyasis. The Buddha bhiksus were sannyasis of the new order. But the devotees did not just limit themselves at alms or food, the rich ones built them splendid monasteries.

“The wealth specially of the rich merchantile community, a large percentage of whom formed the class of lay disciples, was utilized in erecting Buddhist edifices. Every pious Buddhist tried to contribute whatever he could; the poor came forward with their offer of skill and labour; thus grew up a large number of Buddhist monuments”.

The monasteries mostly built close to the main settlements, so the sannyasis wouldn’t have to travel too far to beg alms. But they were just far enough, away from the hustle and bustle of the city, providing solitude for their peaceful meditation. The trade routes were perfect for building monasteries and viharas, hearty donations from rich merchants made the monasteries prosper. Mahayana Buddhism demanded education, this from the 1st century CE, the monasteries or viharas also turned in to educational institutions.

Karnasubarna as a Trade Centre

A large number of Sanskrit inscriptions and inscriptions in other Bharatiya origin languages have been discovered in different parts of Thailand (e.g. Ligua, Takua Pa, Caiya etc.) belonging to the 4th or 5th century CE. 2 of them reproduce a well-known formula of the Buddhist belief and thus proving the  existence of Buddhism in that region since that time in history. One of these inscriptions refers to a certain “Mahānāvika Buddhagupta”, who was “an inhabitant of Rakta-mrittikā”. The presence of a master mariner or captain of a large ship, hailing from Rakta-mrittikā, in the Malay Peninsula suggests that there were trading links between ancient Banga and Southeast Asia. The Chiruti region, adjacent to the Bhagirathi river might have served as one of the channels of maritime trade.

From Kabikankan Mukundarām Cakravartī’s Chandimangal (belonging to the religious text group ‘Mangal Kavya’, 16th century CE), we come to know that Karnasubarna (referred to as ‘Karnapur’ in the book) remained an important trading centre even after losing its political importance post the demise of Shashanka. The legendary Ujjaini kingdom was located at the confluence of the rivers Bhagirathi and Ajay, to the south of Karnasubarna (these areas currently known as Katwa, Ketugram and Mangalkot). A character in the Chandi Mangal Kavya called Dhanapati, who is a trader by profession,  stayed (or resided) at Golahat village of Ujjaini. Dhanapati and later his son Srimanta both did business with Ceylon(Sri Lanka).  We also get the names of Golahat, Patan bil and Bhandardaha bil from this book, which are all located nearby Karnasubarna. Traders of Karnasubarna did business with the far south e.g. Ceylon (Sri Lanka), to South East Asia, to Africa e.g.Egypt, to Europe e.g. Greece and Rome and to China. Trade was carried out both by land and sea.

Going by the Mahabharata, the ancient kingdom of the Anga roughly corresponds to the region of Bhagalpur, Banka and Monghyr regions of Bihar later expanded to include some parts of modern Bengal. Champa, the capital of Anga, which was on the banks of the river Ganga, was noted for its prosperity and trade. Merchants from across the world sailed to the distant Suvarnabhumi (the “Golden Land” or “Land of Gold”, which refers to several parts of Southeast Asia) for trading. These merchants would pass by the areas of Rangamati, Golahat, Mangalkot, Ujjaini etc.

The names of some of these places can be found in the book ‘Kayastha Karika’ by Bengali scholar Nalu Panchanan, where he narrates the story of Chand Saudagar (during the reign of King Adisur (700 – 900 CE) –

Were trading routes for Chand Saudagar

He was a devotee of goddess Jayadevi (Durga)

Because of which he came in conflict with goddess Manasa

Under a Tamarind tree is the Shrine of the goddess

Many Traders have faith in her and worship her

And asked for land to build a temple of Jayadevi

One hundred and sixty bighas of land donated the king

For the cause of the goddess

No tax would apply to this land (Devottar land)

Among which were the twenty villages of Dihiganj

The temple of Jai Mangala at Nabadurga, Golahat village (Kandhi) is believed to have been this temple that was built by Chand Saudagar. The devottar land which were given for the temple by Raja Adisur is still there.

Xuanzang or Hiuen Tsang explored Bharat extensively between CE 629-645. The travel account left by him is a very important resource for historians when chronicling Bharat’s history especially Banga, as the history of Banga is very much shrouded in obscurity due to lack of written materials and other historically eligible evidences.

Xuanzang or Hiuen Tsang visited Bharata in 629 CE. He visited Magadha to see the sacred Buddhist sites and went to Nalanda to study at the Nalanda University. 9 years later in 638 CE he travelled to western, northern and southeastern parts of ancient Banga. After he was done in Banga he made his way to southern India and finally to western India before making his way back to China in 645 CE.

He visited ‘Kie-lo-na-su-fa-la-na’ (Karnasubarna) during the reign of king Harshavardhana of Thaneshwar. He refers to this in his biography ‘Da Tang Xiyu Ji’ (“Records of the Western Regions of the Great Tang Dynasty”). He states that he moved from ‘Tan-mo-lih-ti (te)’ (Tamralipta) to the land known as Kie-lo-na-su-fa-la-na (Karnasubarna). He wrote about the existence of a magnificent and renowned monastery named Lo-to-no-chi or Lo-to-wi-ti (the Rakta-mrittikā Mahavihara).

He mentioned in detail of the structure. The halls of this monastery was spacious with lofty multi-storied towers. This monastery hostedba congregation of many learned and distinguished men of the kingdom. We can also get an idea about the religious beliefs and rituals of the natives of Karnasubarna from Xuanzang’s narrative. Among the several indigenous religions (collectively known as Hinduism), Buddhism was the most thriving. Which pretty much destroys the allegation that Shashanka was against Buddhism. He also mentions that Karnasubarna had 10 monasteries in which resided Buddhists of the Ching-Tiang-Pu (Sammatiya) School.  There were about 50 temples and he also mentions spotting a stupa built by King Ashoka the Great, who was a devout Buddhist from over 2200 years ago (268-232 BCE). Buddhism began spreading in this region during the reign of the great Mauryan king.

He mentioned in his famous travelogue ie, Si-yu-ki (the Buddhist record of western countries) that he had visited of Karnasubarna in 638 CE and saw in his own eyes the palace, the Rakta-mrittikā Mahavihara and a Buddhist Stupa which is said to have been built by King Ashoka.

According to Xuanzang, Buddha had preached in Karnasubarna for 7 days. There were multiple stupas where Buddha preached.

Dr.Ramesh Chandra Majumdar writes, “As vinaya texts are generally believed to have preserved traditions of pre-Asokan days, these passages may be taken to indicate that Buddhism had probably obtained a footing in North Bengal even before Asoka’s time. The great missionary activity of Asoka and the traditions about him recorded in the Divyāvadāna and also by Hiuen Tsang, make it highly probable that Buddhism was not unknown in Bengal during the reign of that great emperor”. 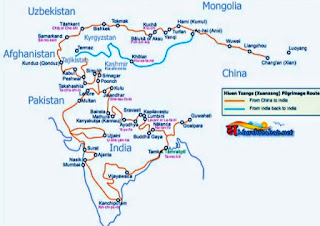 Xuanzang’s pilgrimage route from China to India and back.

Xuanzang provides a vivid account of Karnasubarna, which gets us acquainted with the locality and people of Karnasubarna. His description suggests that the state was in a flourishing condition.

Xuanzang writes, “the kingdom was about 1400 or 1500 li* in circuit; the capital was about 20 li……. the country was well inhabited and the people were very rich. The land was low and moist, farming operations were regular, flowers and fruits were abundant, the climate was temperate and the people were of good character and were patrons of learning”.

*’Li’ is a Chinese unit if distance, it used to be 1/3 rd of an English mile but was later standardized as half a kilometer or 500 meters.