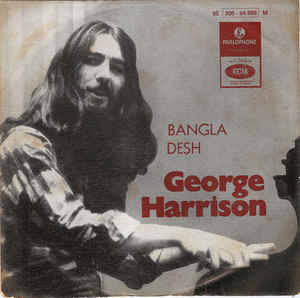 Bangla Desh” is a song by English musician George Harrison. It was released as a non-album single in July 1971, to raise awareness for the millions of refugees from the country formerly known as East Pakistan, following the 1970 Bhola cyclone and the outbreak of the Bangladesh Liberation War. Harrison’s inspiration for the song came from his friend Ravi Shankar, a Bengali musician, who approached Harrison for help in trying to alleviate the suffering. “Bangla Desh” has been described as “one of the most cogent social statements in music history”[1] and helped gain international support for Bangladeshi independence by establishing the name of the fledgling nation around the world. In 2005, United Nations Secretary-General Kofi Annan identified the song’s success in personalising the Bangladesh crisis, through its emotive description of Shankar’s request for help. 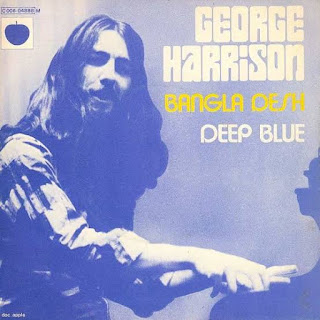 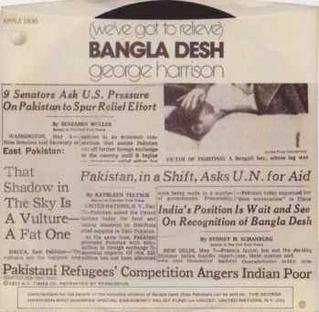 My friend came to me

With sadness in his eyes

He told me that he wanted help

Before his country dies

Although I couldn’t feel the pain

I knew I had to try

Now I’m asking all of you

To help us save some lives

Where so many people are dying fast

Now won’t you lend your hand and understand?

Such a great disaster, I don’t understand

I want to hear you say

Now it may seem so far from where we all are

It’s something we can’t neglect

It’s something I can’t neglect

Now won’t you give some bread to get the starving fed?

We’ve got to relieve Bangladesh

We’ve got to relieve Bangladesh 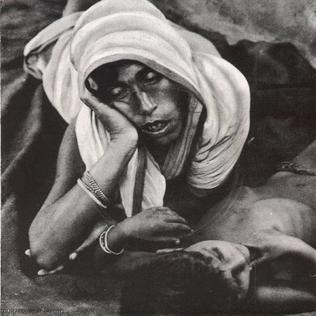 The reverse of the US picture sleeve for “Bangla Desh”: a confronting UPI image that was also used in print advertisements for the single. 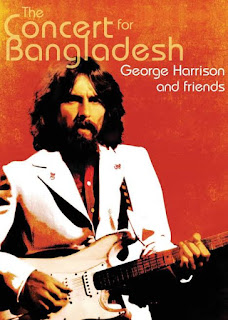 The event was the first-ever benefit of such a magnitude, and featured a supergroup of performers that included Harrison, fellow ex-Beatle Ringo Starr, Bob Dylan, Eric Clapton, Billy Preston, Leon Russell and the band Badfinger. In addition, Shankar and Ali Akbar Khan – both of whom had ancestral roots in Bangladesh – performed an opening set of Indian classical music. The concerts were attended by a total of 40,000 people, and the initial gate receipts raised close to $250,000 for Bangladesh relief, which was administered by UNICEF.

After collecting the musicians easily, Harrison found it extremely difficult to get the recording industry to release the rights for performers to share the stage, and millions of dollars raised from the album and film were tied up in IRS tax escrow accounts for years, but the Concert for Bangladesh is recognised as a highly successful and influential humanitarian aid project, generating both awareness and considerable funds as well as providing valuable lessons and inspiration for projects that followed, such as Live Aid.

By 1985, through revenue raised from the Concert for Bangladesh live album and film, an estimated $12 million had been sent to Bangladesh, and sales of the live album and DVD release of the film continue to benefit the George Harrison Fund for UNICEF. Decades later, Shankar would say of the overwhelming success of the event: “In one day, the whole world knew the name of Bangladesh. It was a fantastic occasion.”