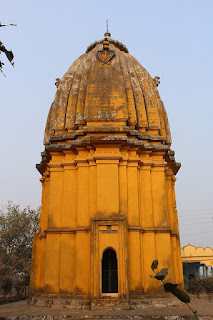 Bankura district was once under the influence of Jainism and a number of Jain relics lie scattered in the district.

Jain relics at villages Sonatapal, Bahulara, Dharapat, Harmasra and Paresnath (near Ambiknagar) are now taken as Hindu relics and some of the intact images are daily worshipped as Hindu deities. The temples at Dharapat and Bahulara villages have naked Jain images, which are known as “Nangta Thakur” or the naked deities. These deities are there along with Hindu deities. 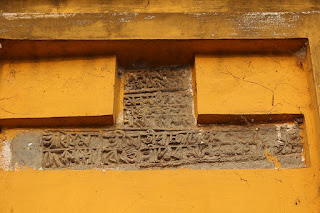 The inscription on the entrance.
According to a Bengali inscription in the main temple at Dharapat, it was built in 1694 or 1704. The idol is thought to be of Shyama Chand Thakur, commonly known as Nangta Thakur. The temple was built by Advesh, Raja of Dharapat. Barren women of the locality worship at the temple with the hope of bearing a child. 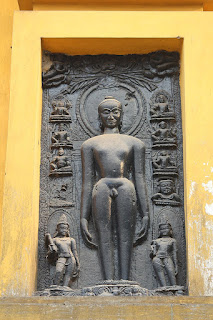 Jain Tirthankara or Shyama Chand Thakur aka Nangta Thakur.
The temple came up in place of a plastered laterite structure that had collapsed. The new temple has four small statues of flying lions on its four sides. There are three excellent stone idols in the temple — two Jain deities and Vishnu. All three are on the outer walls. There are a number of abandoned temples in the village. 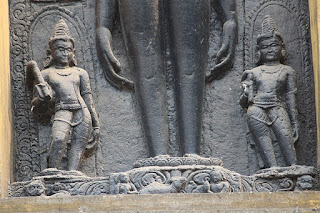 A closer view of the two smaller murthys at the feet of the Tirthankara or the Nangta Thakur. 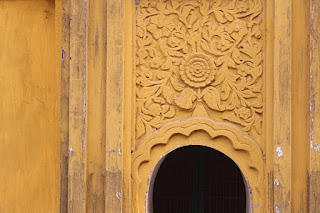 Floral relief on the wall. 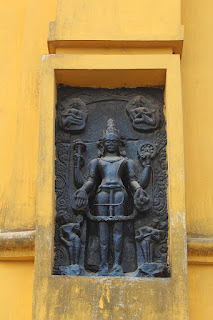 The stone statue of Vishnu which has claimed to be a converted statue of Parasnath.

There is a statue of Vishnu, which according to some is a converted Parasnath idol. The conversion was done by carefully adding two extra hands to make it four. According to some, it signifies the overpowering Vaishnav influence of the time after the decline of Jainism in the area.