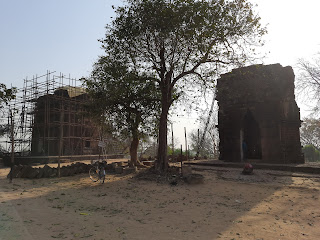 Dihar is a village and an ancient archaeological site (approximately 3,200 years old) of great antiquarian importance located in the Bishnupur subdivision of the Bankura district in the Indian state of West Bengal. It is 8 kilometres (5.0 mi) north of Bishnupur and is near Dharapat. 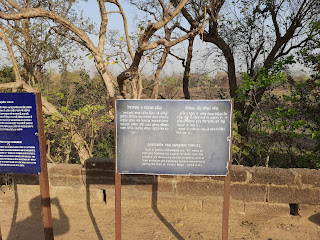 The board put up by the ASI says “Built in laterite, the temples are, Tri-ratha on plan and followed the typical Orissan style. The temples are interesting for fine corbelled archs at their entrances and supposed to have been erected during the time of Prithvi Malla (1346 A.D.)”. 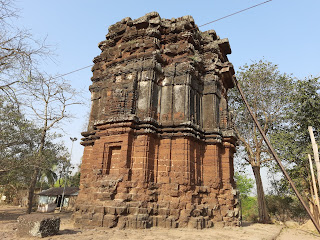 Belonging to the days of copper-bronze age civilisation and with an intricate narrative more than three millennia old, it is one of the earliest sites of human habitation discovered in Bengal which shows successive layers of prehistory, proto-history and history. Going by the styles of pottery (Black and Red Ware, Red Slipped Ware, Grey Ware, Northern Black Polished Ware, etc. found on different and sometimes intermixed levels), microliths, metallurgical fragments, beads, shells, skeletons, terracotta figurines, homesteads, debitage, shards of bone, and habitational refuge one can place this site in the same archaeo-cultural horizon as Pandu Rajar Dhibi. By about 1200-1000 BCE chalcolithic proto-urban people had settled on the northern banks of the Dwarakeswar, most probably belonging to a socio-culturally and technologically advanced branch of the Austroasiatic ethno-linguistic group. After this early proto-historic period, stretching from the copper-bronze age to the early iron age of the pre-Maurya to the Shunga eras, nothing noticeable has been discovered at Dihar till confirmed Shaivite activities beginning roughly from around the 13th-14th centuries CE. 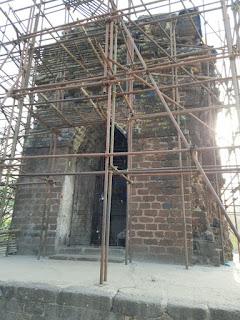 The remains of the Shnareshwara (ষাঁড়েশ্বর) and Shaileshwara (শৈলেশ্বর) Shiva temples, built upon one of the primary chalcolithic/æneolithic habitational mounds, are some of the major attractions at Dihar. There are contradictory views regarding the anquity of these temples. Different scholars have varying views. According to some, Prithwi Malla of the Malla dynasty of Bishnupur had commissioned the temples (their architectural style being referred to as ‘rekha deul’) to be constructed in 1346 CE. But this dating is highly debatable academically, as deduced from their structural and architectural affinities, Prithwi Malla probably had them repaired, restored and reconsecrated in 1346 CE. The two temples were probably built by monarchs from earlier dynasties in the form of twin Jain/Buddhist monuments at around the period when the Siddheshwara temple was built nearby at Bahulara at some point of time during the Pala era or earlier.
Moreover, till date, much academic debate remains over the exact dates of their construction. The unkempt laterite stone walls of the temples have suffered badly from centuries of erosion but intricate floral designs and miniature human figurines captured in dramatic poses can still be made out. Furthermore some eroded or defaced images of divinity can also be seen upon the stone panels. Pilgrims, to this day, gather in the area during Shivratri.
Both the Shnareshwara and Shaileshwara temples are included in the List of Monuments of National Importance in West Bengal by the Archaeological Survey of India (serial no. N-WB-28 & 29). 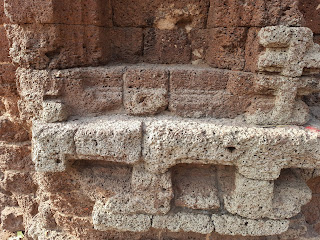 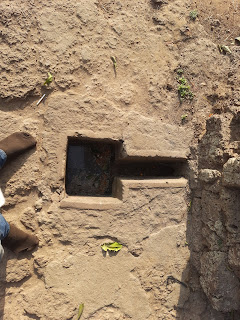 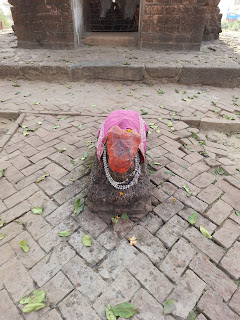 The “Shnar” or bull in front of the Shnareshwar(roughly translated means the “BullGod” or the God of bulls or the lord who rides bulls) temple.