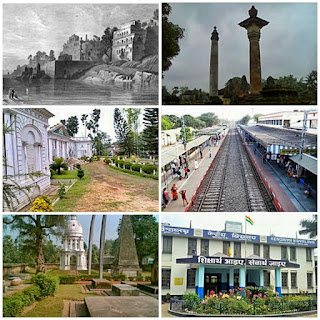 Henry Beveridge, in an article titled ‘Old Places in Murshidabad’ (Calcutta Review, 1892) wrote,  “Berhampore (Baharampur) seems to be a corruption of the Hindu name of the place Brahampur (ব্রহমপুর), i.e. the city of Brahma. Brahmapur (ব্রহ্মপুর) is the name which the original mouza, or village, bears on the collector’s revenue-roll. Probably the name comes from the place having been a settlement of Brahmanas. One of the bathing places in the river is called Bipraghat or Brahman’s ghat. The name does not appear to be in any way connected with the Muhammedan name Bahram. There is a place about 5 miles to the north-east and on the high road to Murshidabad, which has the very similar name of Baharamganj. Probably this has the same origin as Berhampore, though it may be connected with Bahram Jang, a son of Muhammad Raza Khan, otherwise Muzaffar Jang”.

This claim can be attested by the existence of multiple mounds in and around Karnasubarna, which is only about 15kms from Berhampore and has a history dating back to 600 CE or earlier. There are multiple mounds in Karnasubarna and Berhampore namely Rajbari Danga, Rakshasi Danga, Sannyasi Danga, Bhimki Tala and Nilkuthi Mound. These ancient mounds suggest that the town or locality of Brahmapur is an ancient settlement which is at least 1400-1500 years old.

Berhampore was ruled by Raja Krishnath and his ancestors before. He was succeeded by his sister’s son Manindra Chandra Nandy, as he did not have a direct descendant.