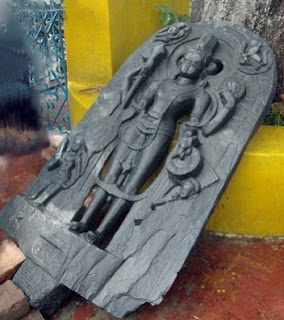 Vishnu idol recovered from Beldanga in Murshidabad, June 2014.
A stone vigraha of Lord Vishnu resembling the idols of Pala and Sena period, recovered from Beldanga, Murshidabad.
The murthy is carved out of chloride schist, a metamorphic rock and is about 4.5 feet tall and 2.7 feet wide.
Amal Ray, deputy director Directorate of Archaeology & Museums, West Bengal government told said that the preliminary examination of the idol suggests that it is an imitation of a Pala idol.
He said a number of such murthys or vigrahas from the Pala period(11-12th century CE) have been found in Murshidabad district.
According to archaeologists idols resembling this one have been recovered at Sagardihi and Manigram in the past.
Murshidabad was the capital of the Pala dynasty for 400 years and lot of artefacts of the period are found in the district. It is also believed that the district located on the bank of Ganga was under the administration of Sena dynasty.
Excavations at Karnasubarna have unearthed even older remains like Rakta-mrittikā Mahavihara, which is at least 2000 years old.