Confiscation and Demolition of J.M.Sengupta’s Home in Chittagong

Confiscation and Demolition of J.M.Sengupta’s Home in Chittagong 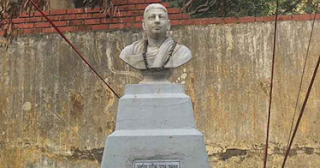 Bust of J.M.Sengupta in Chittagong

A prominent leader of Indian Independence Movement during British colonial oppression was a lawyer named Mr. Jatindra Mohon Sengupta, a Hindu, popularly known as J.M. Sengupta or J.M. Sen of Chittagong, Bengal, India, now Bangladesh. During colonial era Bengal took the lead in anti-British independence movement, and within Bengal province there were several centers, among them was Chittagong on southeast corner, bordering Burma, now called Myanmar. Many nationalists, poets, writers, teachers, entrepreneurs and scientists were born in Chittagong, including Mr. Surya Sen, who was the first to fight the British for independence with armed insurrection. Today there exist a famous meeting place in the City of Chittagong known as J.M. Sen Hall. (During this writer’s visit in 1990s Surya Sen home was illegally occupied.) 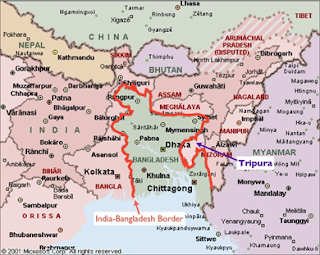 Chittagong on Lower-Right near Myanmar, Kolkata at Lower-Center, and Ranchi on Lower-Left

Through his sheer talent and dedication to Mother India, Mr. J.M. Sengupta became a leading figure of India’s independence struggle becoming the head of the Congress Party, which led Indian independence struggle. He married a British Christian lady, Ellen Gray, also known as Nellie Sengupta, who joined India’s independent struggle becoming the president of Congress Party. She lived with her husband in Chittagong. J.M. Sengupta died in British prison in Ranchi, Bihar of colonial India on July 23, 1933. Earlier Mr. Sengupta became the Mayor of Calcutta five times, the largest city of India which led India’s independence fight. For her activism Calcutta was punished by Britain by moving India’s capital from Calcutta to Delhi in 1912. Mrs. Sengupta continued living in her husband’s ancestral home in Chittagong. It is said that India’s first Prime Minister Jawaharlal Nehru requested Mrs. Sengupta not to flee to India during anti-Hindu pogroms but to live in East Pakistan with persecuted Hindus when Chittagong became a part of East Pakistan after 1947 partition, now Bangladesh after Bangladesh Liberation War of 1971.

In 1970 during Pakistani era Mrs. Sengupta went across the border to India for medical treatment when Pakistan Government declared her homestead “Enemy Property” as it was a minority Hindu property without giving any notice and compensation to confiscate it! (See Bhorer Kagoj of January 8, 2021.) She was not allowed to return home by Pakistan. When she came back in 1972 after Bangladesh liberation her home was taken over by illegal occupiers!

In the new liberal era of Bangladesh, the minority asset confiscation Pakistani law remained with a new title, “Vested Property Act.” Recently, in January 2021 one Farhad Chowdhury, a Muslim, claimed that the Hindu property belongs to him, and began destroying the structure of typical Bengal architecture of 1800s. If an asset of such an important person of Bangladesh, Pakistan and India could be confiscated in broad daylight, “how about the poor Ram, Shyam, Jodhu and Modhu?” – as they say in Bengali, the average Minority. This is how a new form of racism was institutionalized and legalized in post-India-partition West (now Pakistan) and East Pakistan (now Bangladesh), that continues till today. 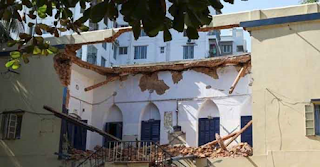 This time the demolition was stopped after protest by diverse activists including Mr. Rana Dasgupta of Bangladesh Hindu Buddhist Christian Unity Council, a native of Chittagong.

This tradition of confiscation of Hindu minority property goes on, including the property confiscation of Mr. Dhirendra Nath Datta, a Hindu, who was the first to ask for Bengali to be a national language in Pakistan Parliament, and its rejection led to Bangladesh independence movement (See https://empireslastcasualty.blogspot.com/ 2009/10/dhirendranath-datta-father-of-idea-of.html.)

Sadly, Kolkata (Calcutta), the city run by Mayor Jatindra Mohon and the epicenter of Indian leftism censored the news – except marginal media – because of left’s communalism, though pretending to be “progressive.” Ruling right of Kolkata and West Bengal also ignored their former mayor’s news. Progressive and conservative media of rest of India, U.K. or U.S. censored the news, but not the Muslim-majority Bangladeshi media.

I wonder when Hindu self-hate, self-destruction and fatalism wanes, left and right communalism of Bengali Hindu refugees in West Bengal, Tripura and rest of India goes down, destruction of ancestral homes and shrines in the name of Islam challenged, secular values of refugees and their descendants rise with desire to go back to their homeland like the Palestinians, Jews, Irish, Armenians, African-Americans, Tibetans, South Africans grows what would be its social, economic and political consequence?