Seal of Shashanka from Rohtasgarh

Seal of Shashanka from Rohtasgarh 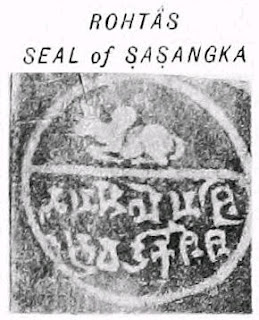 The first mention of Shashanka was in this seal found in the Rohtasgarh Hill Fort of Magadha kingdom, which was assumably built in the 7th century CE. The inscription in the seal reads, “Mahasamanta Shashankadeva.”

Shashanka’s name appears in multiple forms, including Śaśānka and Śaśānka-deva. The name is derived from Sanskrit, as another name for the Moon. Śaśānka-deva therefore loosely translates to Moon god. The Hindu god Shiva is also known as Shashank Sekhar as He holds the moon on his head.

The Chinese monk Xuanzang’s writings, he is mentioned as She-Shang-Kia. He is also called Śaśānka Narendragupta, which initially lent credence to the claim that he was descended from the later Guptas. In Sinha’s Dynastic History of Magadha, the names ‘Śaśānka’ and ‘Soma’ are used interchangeably.

Some historians believe that Shashanka began his career as a feudatory chief (maha samanta) under Mahasenagupta, of the Later Gupta Dynasty. And that after the death of Mahasenagupta, Shashanka drove the later Guptas and other prominent nobles out of the region and established his own kingdom with his capital at Karnasubarna. Other historians like Sailendra Nath Sen is of the opinion that Mahasenagupta – already under pressure from the Maukharis (for failing to provide adequate protection) – wouldn’t have knowingly appointed Shashanka to such an important position. Middleton (2015) argues in a similar vein that Shashanka served as maha samanta to a Gauda king, possibly Jayanaga.