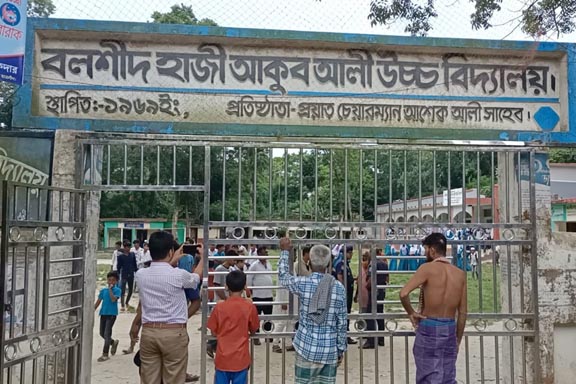 In Chandpur, Bangladesh, a Hindu teacher has again been accused of insulting Islam. The accused Hindu teacher is the headmaster of Balshid Haji Akub Ali High School in Shahrasti Upazila in Chandpur. On September 5, Hindu teacher Akhil Chandra Debnath left the school campus in the face of strong protests.

As soon as this news spread in the local area, the local Islamists became enraged. After that, they came to the school premises together on September 5 and attacked the Hindu teacher, Akhil Chandra Debnath, for allegedly insulting Islam. The victim, a Hindu teacher, somehow managed to escape from there with his life. Due to this incident, the Islamists in the local area have heated the situation. As a result, the local Hindu community is living in a frightening situation.

Incidentally, two Muslim students had accused Hindu teacher Akhil Chandra Debnath of sexual harassment earlier. Because of this, he was fired. But as the allegations were not proven, he was later reinstated. In continuation of that, accusations of insulting Islam have been raised against him. Currently, the victim Hindu teacher, is in hiding.

Previously, a rally of radical Islamists was organised at Sreemangal in Sylhet. It was known that Islamists had instigated attacks on the homes and businesses of local Hindus because of this gathering. There were also reports that local Islamists were looking for opportunities to attack.