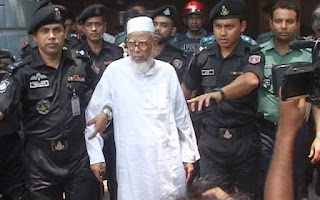 Maulana Abul Kalam Muhammad Yusuf (Bengali: মাওলানা আবুল কালাম মোহাম্মদ ইয়ুসুফ) (19 March 1926 – 9 February 2014) was a Bangladeshi religious scholar, writer, activist and politician. Yusuf was a specialist in the study of Hadith (Prophetic tradition): he earned the title “Mumtaz al-Muhaddethin” for his advanced degree in hadith sciences, and has also published books widely in the field.

According to the prosecution, Yusuf had formed the first team of Razakars (volunteers) on 5 May 1971 with 96 members of Jamaat in Khulna. He started gathering people for the force on 18 April. Yusuf was also reported as the regional chief of anti-liberation force Peace Committee, facing 15 war crimes charges, which included genocide, killing, looting, arson and forcing members of minority faiths to convert to Islam.

His defence team argued that Yusuf, then 87, required to be granted bail immediately because of his old age. Prosecutors however opposed the bail application, arguing that Yusuf had remained politically active despite his advancing years and should remain in jail to prevent him influencing trial proceedings. Subsequently, his bail was rejected and he was sent to jail.

On the morning of 9 February 2014, Yusuf, a survivor of two previous heart surgeries, suffered a fatal stroke while in prison custody. He was taken to Bangabandhu Sheikh Mujib Medical University (BSMMU) hospital at around 11 a.m. that day, after falling ill in his prison cell at Kashimpur central jail, about 30 kilometres (19 mi) from Dhaka, where doctors subsequently pronounced him dead.