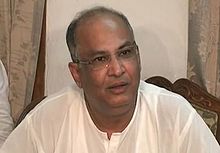 Salahuddin Quader Chowdhury (13 March 1949 – 22 November 2015) was a Bangladeshi politician, minister and six-term member of Jatiya Sangsad and member of the Bangladesh Nationalist Party (BNP) Standing Committee, who served as the adviser of parliamentary affairs to Prime Minister Khaleda Zia in from 2001 to 2006. On 1 October 2013 he was convicted of 9 of 23 charges and sentenced to death by the International Crimes Tribunal of Bangladesh for crimes during the 1971 Bangladesh War of Independence. He was put to death by hanging in Dhaka on 22 November 2015.

Among the charges submitted against Salahuddin in the International Crimes Tribunal were:

iv) Accompanying Pakistan army in the killing of 32 people, arson, looting and raping.

v) Complicity in the killing of Satish Chandra Palit on 14 April, burning his house, and the deportation of his family. Satish’s son testified in court against Salahuddin Quader.