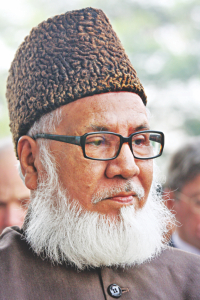 Motiur Rahman Nizami (Bengali: মতিউর রহমান নিজামী; 31 March 1943 – 11 May 2016) was a war criminal, former Minister of Bangladesh, Islamic scholar, writer, and the former leader of the Bangladesh Jamaat-e-Islami. He was the leader of the anti-Bangladesh militia group Al-Badr during the Bangladesh Liberation War in 1971. On 29 October 2014, he was convicted and later executed for his role in masterminding the Demra massacre by the International Crimes Tribunal of Bangladesh. He was the Member of Parliament for the Pabna-1 constituency from 1991 to 1996 and again from 2001 to 2006. He also served as the Bangladeshi Minister of Agriculture and Minister of Industry.

Nizami and eight other leaders of Jamaat-e-Islami were charged with war crimes by the prosecution, as were two leaders of the Bangladesh National Party. Opposition parties and human rights groups alleged political interference in the trial, given that all the accused were leading opposition politicians. Nizami was the last high-profile suspect to be tried for 1971 war crimes; the court delayed his verdict in June 2014 because of the state of his health. On 29 October 2014, it was announced that Nizami had been sentenced to death for war crimes committed during the 1971 independence war against Pakistan.

On 11 May 2016, Nizami was hanged at Dhaka Central Jail, just days after the nation’s highest court dismissed his final appeal to overturn the death sentence for atrocities committed during the country’s 1971 war. He was hanged just before midnight (1800 GMT) after he refused to seek mercy from the President of Bangladesh. He was executed between 11:50 pm and 12:01 am midnight.