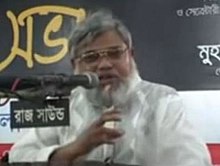 Ali Ahsan Mohammad Mojaheed (Bengali: আলী আহসান মুহাম্মদ মুজাহিদ; 23 June 1948 – 22 November 2015) was a former Bangladeshi politician who served as a Member of Parliament and as the Minister of Social Welfare from 2001 to 2007 of Bangladesh and was convicted of war crimes during the 1971 Liberation war of Bangladesh. He received death penalty by the International Crimes Tribunal of Bangladesh on 22 November 2015, becoming one of the world’s first Ministers to be hanged.

On 17 July 2013, Ali Ahsan Mohammad Mujaheed was found guilty of war crimes such as genocide, conspiracy in killing intellectuals, torture and abduction during 1971 Liberation war of Bangladesh by the International Crimes Tribunal-2 and was sentenced to death for 2 of the 5 charges brought against him. Mujaheed was found guilty on the charge related to the killing of Rumi, Badi, Jewel, Azad and Altaf Mahmud at the army camp set up in Nakhalpara, Dhaka, during the Liberation War.