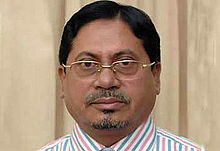 Muhammad Kamaruzzaman (4 July 1952 – 11 April 2015) was a Bangladeshi politician and journalist who served as the senior assistant secretary general of Bangladesh Jamaat-e-Islami and was convicted of war crimes during the 1971 Liberation war of Bangladesh. He was executed by hanging at Dhaka Central Jail at 22:01 on 11 April 2015.

Kamaruzzaman was charged with the following war crimes:

i) Killing of Badiuzzaman by Al-Badr, led by Kamaruzzaman on 29 June 1971.

ii) Torture of Lecturer Abdul Hannan by Kamaruzzaman and his associates in May 1971.

iii) Genocide of 120 men and rape of the women of the village Shohaghpur on 25 July 1971, planned and advised by Kamaruzzaman.

iv) Murder of Golam Mostafa by Al-Badr on Kamaruzzaman’s orders on 23 August 1971.

v) Killing of eight people from Chawkbazar by Al-Badr in presence of Kamaruzzaman at Sherpur in the middle of the Ramadan during the war.

vi) Repression of Didar and others in Mymensingh district in November 1971.

vii) Murder of five on the 27th day of Ramadan by the Al-Badr members following the orders of Kamaruzzaman.