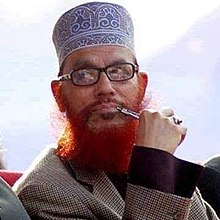 Delwar Hossain Sayeedi is an Islamic speaker and politician who served as a Member of the Parliament of Bangladesh from 1996 to 2008. He was convicted of committing war crimes during and Bangladesh Liberation War, despite his denial. The International Crimes Tribunal of Bangladesh sentenced him to death in February 2013 for crimes against humanity in the war of 1971 in a disputed decision. His crimes included genocide, mass murder, rape and arson. The tribunal received support within Bangladesh, but was criticized by many international observers. In September 2014 the Supreme Court commuted his sentence to life imprisonment.