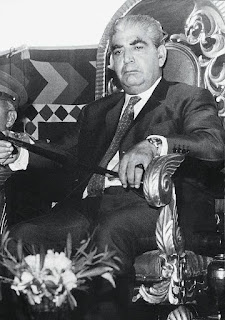 Agha Muhammad Yahya Khan NePl (Urdu: آغا محمد یحییٰ خان‎; 4 February 1917 – 10 August 1980), widely known as Yahya Khan, was a Pakistani general who served as the third President of Pakistan, serving in this post from 25 March 1969 until turning over his presidency in December 1971.

President Yahya Khan, encouraged by Zulfikar Ali Bhutto, banned the Awami League and declared martial law. The Pakistani Army demolished Ramna Kali Mandir (temple) and killed 85 Hindus. On 22 February 1971, General Yahya Khan is reported to have said “Kill three million of them, and the rest will eat out of our hands.”

Yahya remained under house arrest until 1979, when he was released from the custody by martial law administrator General Fazle Haq. He stayed out from public events and died on 10 August 1980 in Rawalpindi, Punjab, Pakistan.