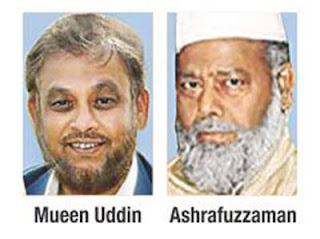 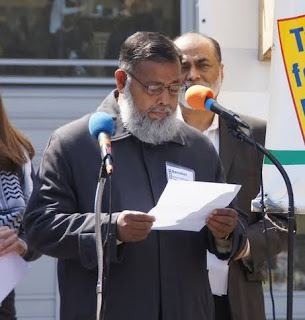 Ashrafuz Zaman Khan (Bengali: আশরাফুজ্জামান খান, Urdu: اشرف زمان خان‎; born 28 February 1948) is one of the convicted masterminds of 1971 killing of Bengali intellectuals. In 1971, he was a member of the Central Committee of the Islami Chhatra Sangha. After liberation he went to Pakistan and worked for Radio Pakistan. Later, he moved to New York and presently heads the Queens branch of Islamic Circle of North America (ICNA). He was sentenced to death in absentia by the International War Crimes Tribunal for killing 18 Bengali intellectuals during the last days of the 1971 Liberation War of Bangladesh.

On April 25, 2013, the International Crimes Tribunal submitted formal charges against Ashrafuz Zaman Khan on the charge of killing 18 intellectuals towards the end of the Bangladesh liberation war 1971, as the “chief executor” of the Al-Badr force. A total of 16 charges of crimes against humanity have been brought against him under five categories, and an arrest warrant against him has been issued by the tribunal.

On November 3, 2013 International war crimes tribunal sentenced Ashrafuz Zaman to death after the tribunal found him guilty of torture and murder of 18 intellectuals including nine Dhaka University teachers, six journalists and three doctors during 1971 Liberation war of Bangladesh. According to International Crimes Tribunal, the prosecution proved all the charges against Ashrafuz beyond doubt. The tribunal also said that Ashrafuz Zaman and his ally Chowdhury Mueen-uddin at times, carried out the murders, sometimes they instigated and encouraged them and the two had complete control over the Al Badr during the 1971 War.

A court found Ashrafuz Zaman and Chowdhury Mueen-uddin to be guilty for the murder of following 18 Bengali intellectuals: