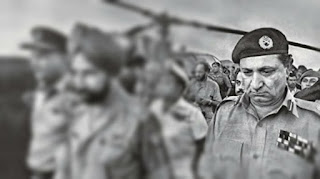 Niazi being taken as a war prisoner by the Indian army after his surrender.

Amir Abdullah Khan Niazi (Urdu: امیر عبداللہ خان نیازی; b. 1915 – 1 February 2004), HJ(Withdrawn), MC, popularly known as A.A.K. Niazi or General Niazi was a lieutenant-general in the Pakistan Army and the last Governor of East Pakistan, known for commanding the Eastern Command of the Pakistan Army in East Pakistan (now Bangladesh) during the Eastern and the Western Fronts of the Indo-Pakistani war until the unilateral surrendering on the 16 December 1971 to Lieutenant General Jagjit Singh Aurora (GOC-in-C) of the Eastern Command and the Bengali Liberation Forces.

After taken and held as a prisoner of war by the Indian Army, he was repatriated to Pakistan on 30 April 1975. Niazi was dishonored from his military service after confessing at the War Enquiry Commission led by Chief Justice Hamoodur Rahman.[6] The War Commission leveled accusations against him for human rights violations, supervising the smuggling of goods during the Indian supported civil war in the East and held him morally responsible for military failure during the course of the war. Niazi however rejected the base allegations and sought a military court-martial while insisting that he had acted according to the orders of the Army GHQ. The court-martial was never granted.

After the war, he remained active in national politics and supported the ultra-conservative agenda under the conservative alliance against Prime Minister Zulfiqar Ali Bhutto’s government in 1970s.

In 1999, he authored the book Betrayal of East Pakistan, in which he provided his “own true version of the events of that fateful year.” On 1 February 2004, Niazi died in Lahore, Punjab, Pakistan.

Major-General (retd) Khadim Hussain Raja who commanded 14 Pak Division during the war, wrote a book `A Stranger in my own country`. In his book, he blamed Lt Gen Niazi for encouraging the rape culture. On page 98, he wrote “……Niazi became abusive and started raving. Breaking into Urdu, he said: Main iss haramzadi qaum ki nasal badal doon ga. Yeh mujhe kiya samajhtey hain. He threatened that he would let his soldiers loose on their womenfolk. There was pin drop silence at these remarks. The next morning, we were given the sad news. A Bengali Officer Major Mushtaq went into a bathroom at the Command Headquarters and shot himself in the head”.

After the war, Hamoodur Rahman commission was set up in Pakistan to investigate the debacle. Commission severally criticized both Gen Yahya and Gen Niazi for their immoral acts. As per the report: “There is little doubt that Gen. Niazi, unfortunately, came to acquire a bad reputation in sex matters, and this reputation has been consistent during his postings in Sialkot, Lahore and East Pakistan.”

One of the witnesses, Lt. Col. Aziz Ahmad Khan testified that “The troops used to say that when the Commander (Lt. Gen. Niazi) was himself a rapist, how could they be stopped”.

Hence murder, loot and rape became the order of the day.

a. A Stranger in my own country by Major-General (retd) Khadim Hussain Raja