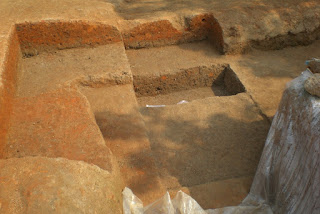 Soil layer covering a road system at Boteshwar excavation site.
The Wari-Bateshwar region (pronounced Uari-Bôṭeshshor or Uwari Boteshwar) located in the Narsingdi District of Bangladesh is the site of an ancient fort city of Gangaridae.  Based on the artifacts found here the city was active between about 2000 BCE to 450 BCE. Hence it is assumable that the city was founded much earlier. The ruins being unearthed near the old course of the Brahmaputra River are a major archaeological discovery in South Asia, which “challenges the earlier notions of early urban civilization in Bengal”. 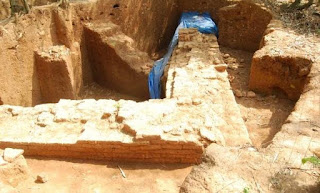 The site is about 70 km north-east from Dhaka situated at Narsingdi’s Belabo Upazila and Shibpur Upazila’s neighbouring village Wari and Bateshwar. 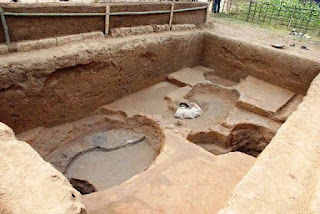 Excavations in Wari-Bateshwar revealed the presence of a pit-dwelling, which is the first of its kind in Bangladesh. People used to live in small ditches. The pit-dwelling is a Copper Age or Chalcolithic artefact. Similar pit-dwellings have been found in India and Pakistan which are believed to be 4000 years old. The unearthing of a 180-metre long, six-metre wide and 21–35 cm thick road with a by-lane points to very early urbanisation in this area. Before the discovery of this, the widely held view was that urbanisation occurred later than the Wari-Bateshwar ruins indicate.
Later the area was part of the ancient region of Samatata. 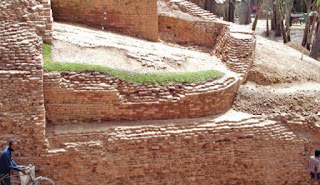 In the neighbouring villages of Wari and Bateshwar, many archaeological artifacts were discovered upon digging. In Wari village in 1933, some local diggers found a pot full of ancient coins dating back to 450 BCE to 300 BCE while digging in the undiscovered grounds of Wari-Bateshwar. In 1955, some diggers unearthed two ancient metal-made things in Bateshwar village. Then in 1956, during digging in Wari-Bateshwar, an ancient silver coin storage buried underground was discovered. In 1976, an archaeological collector named Habibullahh Pathan collected many archaeological things from Wari-Bateshwar and submitted these items to the Dhaka National Museum. In 2000 under the order of Jahangir Nagar University’s archaeologist Professor Sufi Mostafizur Rahman, a digging expedition was begun in Wari-Bateshwar. Discoveries include ancient roads, houses, terracotta, silver coins, hand crafted metal objects, printed currencies, weapons and a host of other artifacts.
Culture and Beliefs
Not much written records are said to be available about the culture and belief system of this region. A Buddhist temple was found about 14 kms away from Wari-Bateshwar in a village named Mondirbhita of Shibpur Upazila.  In another village named Jankhartek a big Buddha temple was found which suggests that at least during the later stages of the civilization, the residents of Wari-Bateshwar had become followers of Buddha. Hence they were Hindus. This is furthermore ascertained by the depiction of Surya or the Sun God on the coins, which suggests that the people were sun worshippers.
From the discovered stone slab and punch mark coins we do get an idea of the religious attributes of the civilization. Symbols of ‘Swastika’ and ‘Nandipada’ were found on the stone slab. Whereas the coins come with punch marks of surya or sun symbol and a six armed figurine of a Hindu dev or devi, there are also mountain symbols with crescent found on coins, which may indicate towards Shaivism, as both the mountain and the moon is sign of Lord Shiva. 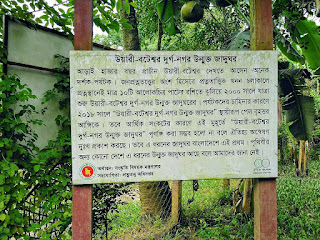 Signboard of Wari-Bateshwar Fort-City Open air Museum in Narsingdi. However, contrary to the researchers, the sign says the Uwari-Bateshwar is only 2500 years old!
Nearly 50 ancient archaeological sites have been found around Wari-Bateshwar, with most of the discoveries being settlements. Some of them are known as Rangartek, Sonartula, Kendua, Morjal, Tongirajar Bari, Mondirbhita, Jankhartek, Tongirtek.
According to researchers, the discovery of rouletted ware, knobbed ware, stone beads, sandwiched glass beads, gold-foil glass beads, Indo-Pacific monochrome glass beads and importantly its geographical location indicates to southeast Asiatic and Roman contacts.
Silver punch-marked coins, different types of earthen pots, rouletted ware, knobbed ware, northern black polished ware, black-slipped ware, common ceramics, semi-precious stone beads. Iron artefacts include blooms, hand-axes, spearheads, knives, nails and slugs, melted pieces of iron. It is also suspected[by whom?] that it might be the oldest place in the world which have a money based currency system. 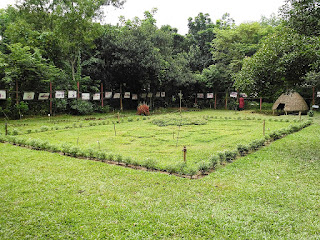 Prof. SS Mostafizur Rahman believes that Wari-Bateshwar is the rich, well planned, ancient emporia (a commercial city) “Sounagora” mentioned by Greek geographer, astronomer, mathematician Ptolemy in his book Geographia. The other emporia mentioned in Ptolemy’s work include Arikamedu of India, Mantai of Sri Lanka, Kion Thom of Thailand. All of these were the most ancient civilizations in their respective regions, each was a river port, and all of them produced monochrome glass beads. The artifacts found at Wari-Bateshwar bear similarity with those found in the other emporia sites.

Mathematician Narayan Chandra Ghosh, a resident of Kolkata visited his birthplace of Satirpara-Narsingdi and explored Wari-Bateshwar on 30 June 2016 to collect detailed information about mathematical concepts used there. He has popularized the word ‘Folk Mathematics’ that he has found at Wari-Bateshwar also. He has written articles on Wari-Bateshwar in Daily Desher Katha (Published from Agartala), Chalojai published from Kolkata.