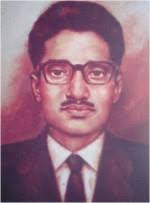 As per the statement provided by Sukharanjan’s wife, the Pakistan army entered Rajshahi University on the 13th of April, 1971. An injured soldier of East Pakistan Rifles came to his house at midnight. He provided first aid to the soldier who left before daybreak. The next day the Pakistan(West) Army came to his house looking for the injured EPR soldier. The Pakistan army was accompanied by Motiur Rahman, a Bihari and the head of the psychology department, and Ahmed Muhammad Patel, a teacher of geography in the University. The Pakistan army interrogated him and was about to leave when Motiur informed them that Samaddar was a Hindu, at which point Pakistan army picked up Samaddar. Samaddar’s family was told that he was with the Vice-Chancellor Syed Sajjad Hussain and there was nothing to worry about. The whereabouts of Samaddar were not known until after the end of Bangladesh Liberation war. His dead body was found after the war and it was learned that he was executed on the night of his abduction. He was reburied in front of the Library of Rajshahi University on 25 February 1972.