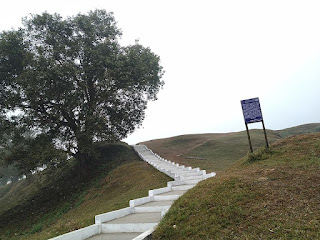 Rajpat or Kamtapur Fort is an archaeological site in Gosainmari in the Dinhata subdivision of the Cooch Behar district in West Bengal.

The Kamata Kingdom (pron: ˈkʌmətɑ) emerged in western Kamarupa probably when Sandhya, a ruler of Kamarupanagara, moved his capital west to Kamatapur sometime after 1257 CE. Since it originated in the old seat of the Kamarupa kingdom, and since it covered most of the western parts of it, the kingdom is also sometimes called as Kamarupa-Kamata. It covered a region corresponding to present-day undivided districts of Kamrup, Goalpara, Jalpaiguri, and Koch Behar in India and Rangpur and northern parts of Mymensingh in Bangladesh. The rise of the Kamata kingdom marked the end of the ancient period in the history of Assam and the beginning of the medieval period. The last rulers were the Khens.

The Khen dynasty replaced the weak rulers of the Kamata kingdom in the middle of the 15th century. There were only three Khen rulers. The last king, Nilambar expanded the kingdom to include the present Koch Bihar district of West Bengal, the undivided Kamrup and Darrang districts of Assam, northern Mymensingh, now in Bangladesh, and eastern parts of Dinajpur district. In 1498, its last capital at Gosanimari was attacked by the invading army of Alauddin Husain Shah of Bengal. That was the end of the Khen dynasty.

Khens, who were later displaced in 1498 by Alauddin Hussain Shah, the Turko-Afghan ruler of Gauda. Though Hussain Shah developed extensive administrative structures, he lost political control to a confederation of Baro-Bhuyan within a few years.

Biswa Singha removed Baro-Bhuyan confederacy and established the Koch dynasty soon, in 1515. The Koches were the last to call themselves Kamateshwars (the rulers of Kamata), but their influence and expansions were so extensive and far-reaching that their kingdom is sometimes called the Koch Kingdom. In the same century the kingdom split in two: Koch Bihar and Koch Hajo. The eastern kingdom, Koch Hajo, was soon absorbed into the Ahom kingdom in the 17th century. The western portion of the Kamata kingdom, Koch Bihar, continued to be ruled by a branch of the Koch dynasty and later merged with the Indian territory after the independence of India from the British domain. The boundary between Koch Bihar and Koch Hajo is approximately the boundary between West Bengal and Assam today. 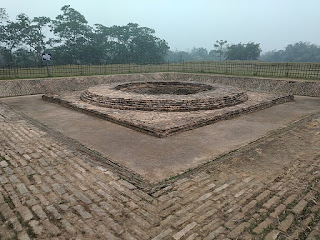 The Kamtapur Fort was spread from the Dharla River in the east to Godaikhora in the west, and from Sitalabas in the north to Silduar-Soawariganj in the south. The palace was in the centre of the fort and is now referred to as Rajpat. 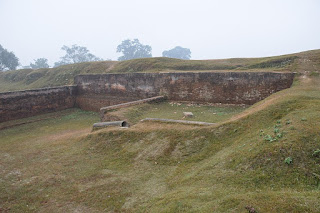 The fort was surrounded by a horse-shoe type high earthen wall running for around 22 kilometres (14 mi) and was open only on the side where the Dharla River was there. Now, it is mostly around 30 feet high and 35 feet wide. It was higher and wider in earlier days. The fort had seven entrance doors. There was a 250 feet wide float all around it. There was a system of providing regular water for it. Various people visiting the fort in the earlier days had seen many roads, temples, ponds and other utilities. In 1808, Dr. Buchanan Hamilton, visited the place and saw many broken structures. He also saw two brick-built walls inside the earthen enclosures. He left behind a detailed report. Now, all one can see is a large mound strewn with broken pieces of structures. Many statues or interesting items found in the fort have been kept aside for visitors to see. 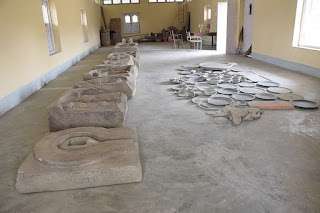 According to the List of Monuments of National Importance in West Bengal Rajpat is a monument of national importance.

Excavations were carried out in 1998-2000, by the Archaeological Survey of India at the Rajpat Mound. Only a few antiquities and some pottery have been found. The pottery bears similarity with pottery made/ used in Assam, some of the antiquities indicate their belonging to the Pala-Sena period of the 11-12th century. The excavations do point to the place having come up before the Khen dynasty captured it.