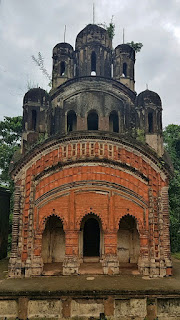 Pathra is a village in the Paschim Medinipur district of West Bengal, which is home to  hundreds of temples.

Unfortunately, many of the temples are in bad shape because of lack of preservation, damage by the Kangsabati and vandalizing by the locals.

Most of the temples were built by the Ghosal (later changed to Majumdar) and Banerjee families. The decline started when the rich families shifted base. However, with the persistent efforts of a small group of enthusiasts, Pathra has turned the tide. The Archaeological Survey of India has taken charge of 28 temples and have repaired 18 temples. Pathra Archeological Preservation Committee, a non-government organization, also looks after the structures.

A major attraction is the 250 year old, 40 feet high Navaratna temple. There is a small atchala temple in the same compound. Located nearby are three atchalas and a pancharatna temple. Behind the cluster is a Durga dalan. Some distance away is another group of pancha-ratna temples. The Sitala temple (also known as Burimar than) is 40 feet tall. Other important temples are Sarbamangala, Kalachand, Das Mahavidya and Hansa. The rasmancha built in 1832 has nine small towers.

The Dharmaraj mandir, the mandirs of the Bandopadhyay family, the Sitala mandir and the Navaratna mandir, all four at Pathra are Monuments of National Importance in West Bengal. 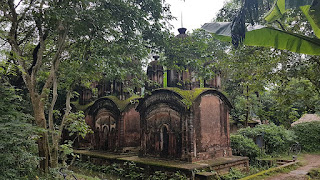 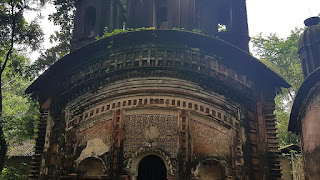 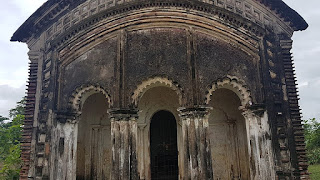 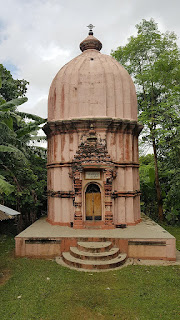 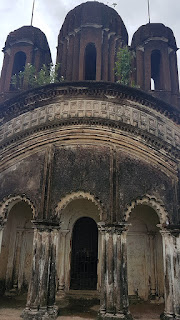 David J. McCutchion mentions a ruined temple at Pathra as a charchala on an elongated base, the navaratna as having smooth rekha turrets, the Kalachand temple as a flat roofed temple with a porch on five arches, and the Sitala temple as having a shallow porch projection.