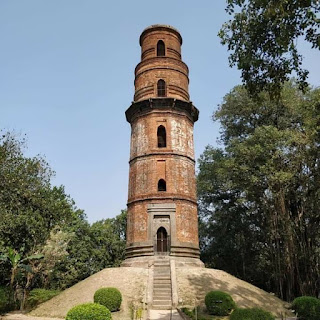 Firoz Minar (Tower of Firoz) is a five-storeyed tower situated at Gour(Gauda) in Malda district of West Bengal. 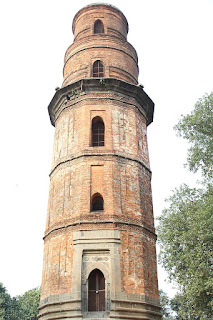 The first three storeys of the five storeyed monument are dodecagonal, the final two are circular in shape. The tower is 26 metres or 85 feet high and its circumference is 19 metres or 62 ft. A spiral 73 step staircase leads to its top.

The minar resembles the Qutb Minar of Delhi.  There used to be a dome at the topmost storey, which got replaced by a flat roof during restoration.

Islamic historians and left-western historians could not come up with a good reason behind the building of this monument. It is said the Firuz Shah had this tower built to commemorate his victories in the battlefield! Why? And how does a five storeyed monument resemble his victories? Did he win 5 major battles? They say that the construction of this tower began in 1485 CE and ended in 1489 CE, which is an accurate guess as a relatively simple monument can be finished in that given time, but then there is another story – it is said that Firuz Shah threw the chief architect from the topmost storey as he was not satisfied with the minar’s height! Now here’s the problem with that story, the terracotta works on the walls of the monument has Hindu/Jain motifs. The entrance has lotus decorations and floral decorations are all over the walls. If looked at closely, one can see upward pointed arrow designs, similar to the ones in Adina Masjid. This was definitely a Hindu monument, which was occupied and renamed after Firuz Shah conquered the area. So what kind of monument was this? The tower sits on top of a masonry plinth, a high ground. The base of the monument is the highest point in the area. It is 85 feet high and had an opening to watch the sky. It was assumably an astronomical observatory with a dome that also had a vertical opening to observe the night sky.

However, it cannot be ascertained. But interestingly the minar is colloquially referred to as Pir Asa ‘Mandir’. Mandir! Now ‘Asa’ means staff, so it refers to some Pir’s staff. But why would the locals call it a mandir? Why would a Pir have a mandir? Was it then a mandir that was occupied and later converted in to an Islamic monument? We’ve all seen multistoreyed raths or chariots of Jagannath, let’s cite the Dhamrai rath for example. The rath is treated not only as a carriage but also as a place of worship for Krishna, Balaram and Subhadra. This monument could have been a mandir, designed after a rath. But the chances of that are less.

The monument is also called Chirag Dani meaning lamp holder. Now I ask the reader to contribute here, if you have any knowledge about lamps being lit on high monuments. It is not anywhere near a sea, so the chance of it being a lighthouse is nil. However, it could have been a watchtower and the guy Firuz threw off the top was no architect but rather a sentinel, who used to guard the Hindu king’s kingdom…

The Psychological Perspective of Establishing a Lie in Islamic Narratives

Islamic narratives develop over time, countering the truths. It is impossible to kill off all the locals after a takeover. Hence many of them know what really happened and remember. So when they claim an ancient Hindu monument as something they built recently, inevitably a voice rises and says, “you didn’t build it, it was ours! The Shah threw off the sentinel from the top, my father saw it with his own eyes!” Then to cover this up, the Mullahs or the Islamic intelligentsia counters with, “yes the Shah did throw someone off the top of the minar, but it wasn’t a Hindu king’s sentinel. It was the chief architect hired by the Shah himself as he was unhappy with his work.” Now the cruelty of this fictitious act of throwing off the architect does not make much of a mark in the listerners mind. The same thing goes with the Taj Mahal. The incredible cruelty depicted in the fictitious story of cutting off the thumbs or hands of the masons who worked to build (not) the Taj Mahal does not make a mark in the listeners mind, rather it strengthens the false narrative that the Taj was built by Shah Jahan and that it’s not a mandir. This is a psychological game. They take blame for a very cruel act to hide the real truth and establish a falsehood like “Islamic architecture in India”.

The Inconsistency in the Dates

Shah’s birth name was Malik Andil Habshi. He was an army commander of the Sultanate’s Ilyas Shahi dynasty till 1487CE and took over power after killing the rebel Sultan, Barbak Shah II, in 1487CE. After claiming the throne, he styled himself as Saifuddin Firuz Shah.

So if he ascended the throne in 1487, how did he commission the building of the monument in 1485CE? This is basically the inconsistency that occurs when you lie too much, you forget to cover up certain things and then someone catches it and you’re exposed. This inconsistency in dates and building period is there in every Islamic narrative about the construction of monuments. Can you imagine, they claimed to have built the Purana Qila in 10 months? B.B.Lal and his team later found several artefacts dating as far back as 1000 BCE and proof of continuous habitation through the Maurya, Shunga, Rajput, Sultan era. Similarly this inconsistency in the dates pertaining to this particular monument raises many questions. I have given you 3 theories on what it really could have been. Maybe you the reader can think of more possibilities and the true antiquity of the monument …

Keep in mind, Firuz Shah ordered Majlis Sa’d to convert a mandir in Maldah. On 18 January 1489, he ordered Mukhlis Khan to the convert a ten-domed (dome=ratna) mandir in Goamatli, Maldah. In the same year, he also ordered Ulugh Ali Zafar Khan to convert a mandir in Kalna. It is also considered that the Bokainagar and Tajpur forts were Hindu monuments occupied by Majlis Khan Humayun during his expedition to Kamarupa, under the orders of Firuz Shah. The Katra mosque in Maldah is yet another occupied and converted Hindu temple.