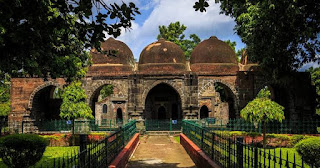 Zafar Khan Ghazi Masjid and Dargah is situated at Tribeni in Hooghly district, West Bengal, and may be the oldest surviving mosque in Bengal. It was a Hindu temple conquered during the early phase of the Islamic conquest of Bengal. The mosque has been dated 1298 CE(698 AH), but this does not indicate the date of its completion, but its conquer.

Tribeni, which is the junction of 3 rivers e.g., the Ganga, the Jamuna and the Saraswati, was and still is a holy place for the Hindus. Tribeni was conquered by Zafar Khan in 1298 CE upon the orders of Ruknuddin Kaikaus Shah, the Sultan of Gaur. After conquering Tribeni, Khan converted the Vishnu temple in to a Masjid to exert dominance. He possibly kept some areas reserved or vacant for a Dargah after his death, or maybe his succesors did it on his behalf.

Upon examining the architecture of this masjid and dargah, one can clearly see the ruins of a Vishnu temple.

The masjid is oblong shaped. In some places we can see ‘brick and stone’ construction replacing the traditional Hindu style of laying rectangular stones one upon one without mortar. So possibly the new construction was laid on top of the old existing Hindu structure. According to some experts, the stones used in the masjid were temple materials, as one can clearly see the Hindu deities carved on the pieces. If that assumption is correct, then that means the existing temple was demolished and certain pieces were picked up from the ravages to be reused, which though is not unheard of, is quite improbable.

Upon thorough examination, one may come to the conclusion that the original structure has been reconstructed many times to hide the obvious signs of Hinduism, but there are still a substantial number of old stones that display the Hindu deities.

To the east of the masjid just beyond an open courtyard, there are the graves of Zafar Khan and his wife. The graves are housed by two square rooms, the walls of which indicate that they were smaller temples, dedicated to other related deities, assumably Lakshmi and others. Some say the walls were among the temple materials used for building the rooms, but that assumption seems absurd as breaking down a wall and then being able to reuse it to construct a new structure is improbable.

One of the doors of these rooms shows a clear Hindu framework, which has the carved figure of Hindu deities. Another room shows sculptured scenes from the Hindu epics Ramayana and  Mahabharata.

Tribeni was a place of pilgrimage for Hindus and a Kumbha Mela was conducted here, which is now a forgotten memory, forsaken from the pages of Bengali Hindu history… 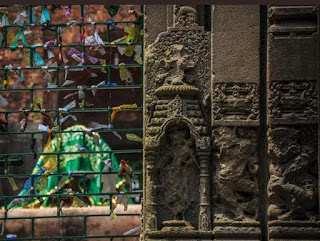 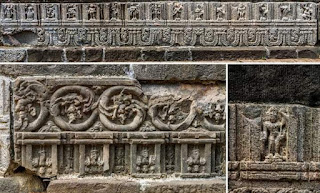 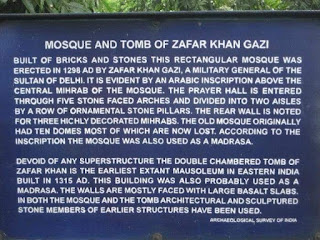 And we furthermore would like to state what the ASI knows but for some reason doesn’t want to accept or reveal – the masjid and dargah were not built using materials from earlier structures. The Zafar Khan Ghazi Masjid and Dargah is simply a converted Hindu temple.