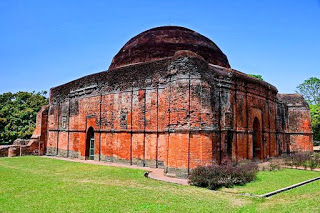 Chika Masjid is one of the most famous monuments from the medieval times. It is located in Gaur, Malda (Gauda); which was once the administrative centre or capital of Shashanka’s Banga/Vanga. The structure of the masjid is built out of carved stones taken from a demolished Hindu Temple and enamelled bricks in cornices.  It is also a mausoleum. It was also used as a prison or a dungeon by Sultan Hossain Shah (1493-1519 CE). The word ‘Chika’ means bats (chamchika). The place was ancient temple which had become house to many bats before it was cleaned out and turned in to a Masjid. Images of Hindu idols on the stonework of doors and lintels are still clearly visible and the ancient Hindu style ornate carvings on the walls are further proof that this was indeed a temple. Furthermor, the masjid also bears traces of traditional mandir architecture of the classical times. Many dilapidated Hindu idols and ancient pillars are seen lying in the gateway and the masjid courtyard.

Hussain Shah had once imprisoned his Hindu minister Sanatan Goswami inside this monument during the time of his invasion to Orissa. Sanatan was an ardent devotee of Sri Chaitanya Dev and he refused to accompany Shah in his voyage. Goswami was later able to flee from prison after bribing the jailor Habboo. He lived out the rest of his life in Vrindavan, UP.