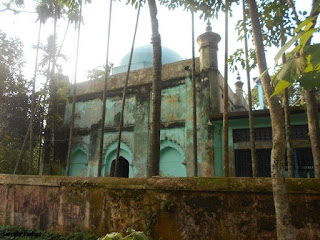 Situated in the biggest village of the world, Baniachong(alt. Baniyachong, Hobiganj district, Sylhet division), the Bibir Muqam Masjid or Bibir Dargah is an ancient structure which is actually a Hindu temple that was converted some time in the 18th century CE or earlier.

Baniachong constituted the grand estate (zamindari) of Anwar Khan, who was looked upon as a raja by the local people. Estate of Baniachong was so vast it crisscrossed all districts of Sylhet region as well as the greater Mymensingh, Dhaka and Comilla.

In accordance with the Pargana system introduced by Murshid Quli Khan in 1722, Anwar Khan claimed tenure of 28 Parganas of Muazzamabad, but his claim was rejected after an investigation by the revenue office, as these Parganas belong to the posterity of Shah Muazzam Uddin Qureshi, who assumed the name of Muazzam Khan when he ascended the throne of Muazzamabad.

The history of the battle between Anwar Khan and his brother Hussain Khan (Bara Bhuiyans of Baniachang) with the Mughal army in the first decade of the seventeenth century is found in the Baharistan-i-Gayebi. Zamindars of Banyachung was renowned for their generosity, but the last zamindar was more than generous; he was well known for his gullibility and his aged but adept and calculating servants such as dewans and chaudharies swindled him left, right and centre. By the time of the retirement, dewans and chauddharies working for Banyachung zamindar ended up holding more lands than the zamindar himself. This was achieved through a severance scheme conjured up by a shrewd dewan; this scheme made the zamindar honour-bound to grant land (taluque) to his servants on retirement and there were two categories of taluque: (i) Khalisa and (ii) Mujrahi, aka Mujrai. The first category of taluque, i.e. Khalisa, was reserved for the male servants and the second category of taluque, i.e. Mujrai, was reserved for zamindar’s courtesans. This scheme ruined the zamindary of Baniyachung within a very short span of time and created numerous Khalisadar and Mujraidar in the region, who nowadays style themselves as chowdhury in Sylhet region.