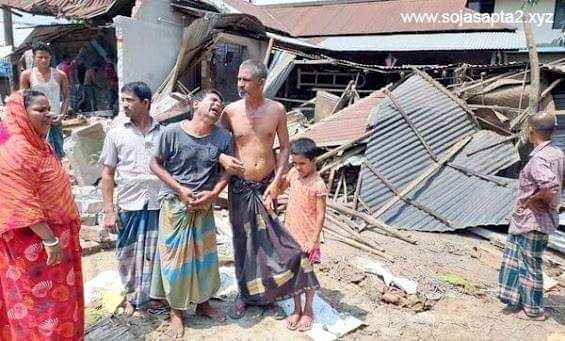 The local administration has demolished the houses of four Hindu families living in the Kesharganj Bazar area of Fulbaria Upazila of Mymensingh, Bangladesh, in the name of an illegal construction eviction campaign. A total of 12 members of four Hindu families are now homeless. In this government operation, 4–5 houses, including the Hindu family’s living room, shop, and place of worship, have been demolished. The victimised Hindu men, women, children, and elderly have lost everything and are living extremely inhumane life.

The Hindu families complained that they wanted to take possession of their ancestral land, but during the operation, the concerned officials did not accept it and demolished their houses with bulldozers. Under the leadership of Upazila Assistant Commissioner (Land) Selina Akhtar and Upazila Executive Officer Mohammad Nahidul Karim in Fulbaria, an operation for the eviction of illegal structures was conducted in the Kesharganj market of the Upazila on October 4 and 9. When asked about the operation, Fulbaria Assistant Commissioner Bhumi Selina Akhter said, “UNO sir can tell you about this matter.”

It is mentioned in the complaint that his four children from the deceased Jagdish Chandra Saha of Palashihata Mauja of Fulbaria Upazila have been owning and living in 3049.2 square feet of the land for ages. Out of the said land, 435.6 square feet of land are wrongly entered in BRS records under Khatian Nos. 127, 111, and 155. Because of the wrong record entry, they could not occupy the land at all. Gopal Chandra Saha, a member of that family, filed a suit in the court of Assistant Judge Fulbaria for the correction of the said wrongly recorded BRS Khatian, which is Suit No. 13/2020. The case is currently pending in court. In this situation, Fulbaria Assistant (Land) and Executive Magistrate Nalishi conducted the eviction operation on the land, and it has been mentioned in the allegation that there is a lot of damage to the homestead.

Gopal Chandra Saha and his younger brother Nepal Chandra Saha, members of the Hindu victim family, said tearfully, “We have been living on the land of our grandfather and Thakur Dada, inherited from our ancestors. We were not given any notice regarding the eviction drive. Arriving suddenly and verbally telling us a few hours later in the evening, he bulldozed everything. Because we are helpless Hindus, this oppression is on us today. We have lost our homestead and our only source of income, the shop, and are now sitting on the streets. Only Bhagwan knows how we will face our family and the little children in the family. Why did they demolish our establishment until the pending court case is settled?”