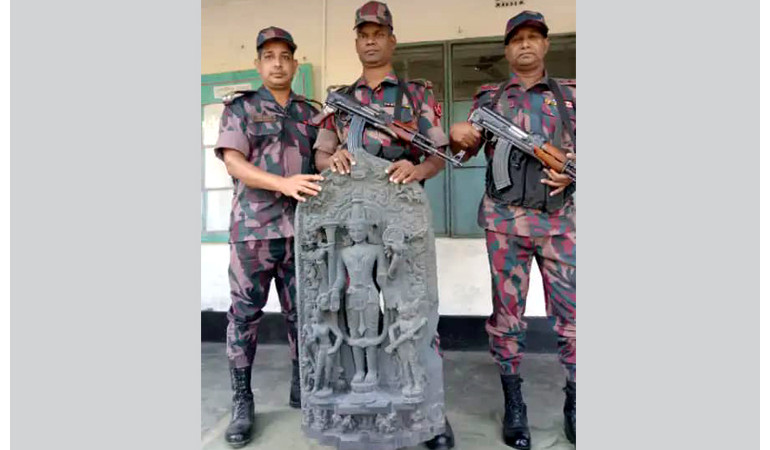 The Border Guard Bangladesh (BGB) has recovered an ancient Vishnu Vigraha made of rough stone and abandoned on the India-Bangladesh border at Panchagarh district in Bangladesh.

At midnight, members of the Tokapara BGB camp under Nilphamari 56 BGB recovered the Vigraha from a house 500 yards inside the Tokapara border area of Amarkhana Union of Panchagarh Sadar Upazila on Friday.

Later on Saturday (October 29) morning, it was taken to the battalion for examination. Locals said that the Vigraha was abandoned in a house in the Tokapara border area. BGB camp members raided and recovered it based on secret information.

Previously, an archaeological excavation at Rezakpur in the Kapilmuni union of Paikgachha Upazila of Khulna unearthed a thousand-year-old specimen. It has been named ‘Kapilmuni Dhibi’. Terracotta, Vigrahas, large earthenware hooks, cowries, rice, bricks, etc. were found there. The excavation work started on March 12 and lasted till the last week of April. The excavation team was led by Afroza Khan Mita, Regional Director, Khulna and Barisal Division of the Department of Archeology. She said, “The patterns we have found in Rezakpur village are thought to be between 1000 and 1200 years old.”